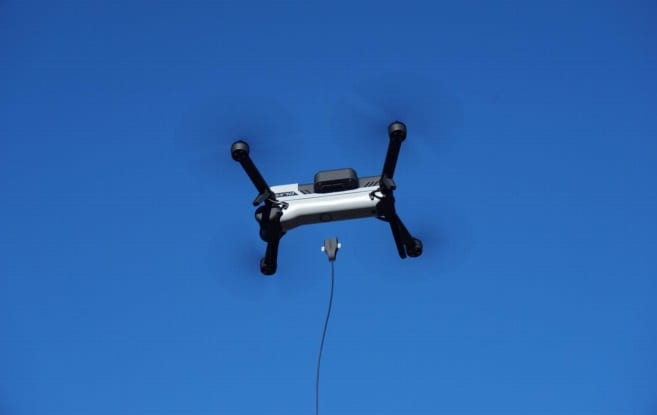 Novadem has announced that it has developed the next generation of its NXWIRE tethered drone system, which allows Novadem’s NX70 drone to benefit from unlimited endurance when tethered while keeping its response capability due to the droppable cable. The system will be displayed at the 2018 AUVSI Xponential exhibition.

“During discussions with customers and special units, we noticed a need for persistent, improvised and immediately available aerial observation. We therefore decided to design the very first tethered solution for drone as a plug-and-play equipment of our solutions. Over the years, this solution came to equip the French Army, the Police of Brussels and the French Railway company,” commented Pascal Zunino, CEO of Novadem.

Customer feedback allowed Novadem to identify the limitations of the first-generation system. The drone, linked to a cable, lacked the capability to get closer to an event if the situation necessitated this. The cable constraineds the drone to hover above its power unit which does not allow the drone to keep visual contact on a target moving behind vegetation or a building. Transition between the tethered and non-tethered configuration required the drone to land in order to unplug the cable and then plug in a battery before taking off again. This transition lead to an observation loss of several minutes during which the target can disappear.

To offset these constraints, Novadem has developed a second generation of tethered drone, the NXWIRE 2.0, providing the ability to unlock the drone from its cable while it is still airborne, freeing it from all the constraints of a tethered configuration.

Designed as an add-on for the NX70 drone, the NXWIRE 2.0 is composed of three main parts:

“With the NXWIRE 2.0, we have gathered the best of both worlds: the capability to ensure improvised and long-lasting observation missions thanks to the ground-power supply, and the capability to get closer to the target without ever losing sight of it to support response teams,” added Pascal Zunino.

“The American market of micro-drones for defense and security professionals has been experiencing an important growth for several years. Most entities are still experimenting to gain more insights into the operational added-value brought by this new tool. Although dominated by consumer drones and despite the presence of main American manufacturers, we are convinced that the versatility of our solutions as well as our capability to interface them in the environment of the client will be major assets to seduce American customers and commercial partners,” said Johann Boucher, Business Development Manager of Novadem.