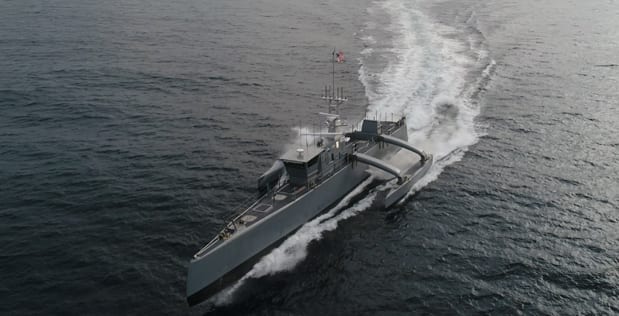 DARPA has announced that it has successfully completed its Anti-Submarine Warfare (ASW) Continuous Trail Unmanned Vessel (ACTUV) program and has officially transferred the technology demonstration vessel, christened Sea Hunter, to the Office of Naval Research (ONR). ONR will continue developing the revolutionary prototype vehicle — the first of what could ultimately become an entirely new class of ocean-going vessel able to traverse thousands of kilometers over open seas for months at a time, without a single crew member aboard — as the Medium Displacement Unmanned Surface Vehicle (MDUSV).

“ACTUV’s move from DARPA to ONR marks a significant milestone in developing large-scale USV technology and autonomy capabilities,” said Alexander Walan, a program manager in DARPA’s Tactical Technology Office (TTO). “Our collaboration with ONR has brought closer to reality a future fleet in which both manned warships and capable large unmanned vessels complement each other to accomplish diverse, evolving missions.”

“ONR appreciates the truly impressive work by DARPA in advancing this technology, and the strong partnership we’ve had on ACTUV over the years,” said Robert Brizzolara, ONR program officer for MDUSV. “As ACTUV transfers from DARPA to ONR, ONR is looking forward to continuing and capitalizing on the science and technology work. In particular, we are already working on autonomous control, a challenging area that is key to maturing MDUSV and delivering it to the fleet.”

“ACTUV represents a new vision of naval surface warfare that trades small numbers of very capable, high-value assets for large numbers of commoditized, simpler platforms that are more capable in the aggregate,” said Fred Kennedy, TTO director. “The U.S. military has talked about the strategic importance of replacing ‘king’ and ‘queen’ pieces on the maritime chessboard with lots of ‘pawns,’ and ACTUV is a first step toward doing exactly that.”

The agencies’ collaboration started in September 2014, when DARPA and ONR agreed to jointly fund an extended test phase of an ACTUV prototype. An April 2016 christening ceremony marked the vessel’s formal transition from a DARPA-led design and construction project to a new stage of open-water testing conducted jointly with ONR in San Diego, Calif.

In October 2016, DARPA and ONR began at-sea testing of Sea Hunter’s sensing and autonomy suites. Between February and September 2017, the vessel passed three progressively challenging tests to integrate the suites and use them to comply with International Regulations for Preventing Collisions at Sea (COLREGS) in operationally realistic scenarios.

DARPA and ONR also conducted tests to prove a key element of the ACTUV/MDUSV design: the flexibility to handle diverse missions by switching among modular payloads. Sea Hunter had a successful joint test in September 2016 with DARPA’s Towed Airborne Lift of Naval Systems (TALONS) research effort. In August 2017, the vessel conducted at-sea tests with a mine countermeasures (MCM) payload.