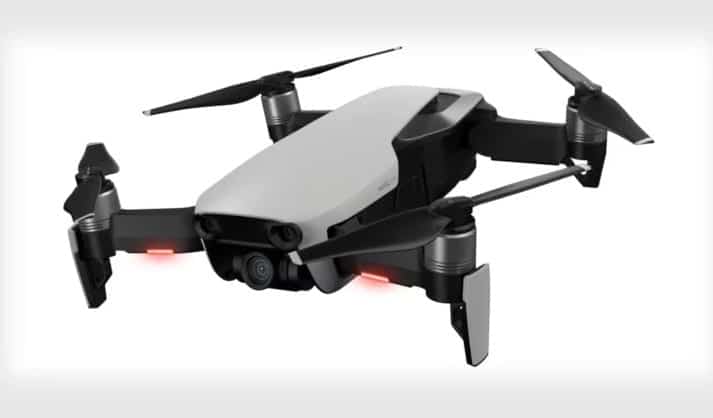 “When DJI introduced the Mavic Pro, it reinvented what a consumer drone could be: powerful, yet portable, accessible, but advanced,” said Roger Luo, President at DJI. “Today, with the introduction of Mavic Air, we have pushed these attributes to the next level to create our best consumer drone yet.”

Weighing just 430 grams, Mavic Air’s footprint is nearly the size of a modern smartphone when folded.

Mavic Air is DJI’s first drone with 8 GB of onboard storage allowing users to save photos and videos directly to the aircraft on the go, plus a micro SD card slot for additional storage capacity. The newly-added USB-C port makes exporting captured footage easy and fast.

QuickShot intelligent video modes use predefined flight paths that automatically keep the subject in the frame, such as Rocket, Dronie, Circle, or Helix plus two new modes Asteroid and Boomerang. Asteroid starts with a spherical image that zooms in as it descends toward the subject on the ground, while Boomerang circles the subject in an oval-shaped flight path with the video finishing at the start point.

Mavic Air’s ActiveTrack intelligent flight mode has been improved to automatically sense multiple subjects, following the subject and keeping it in the frame with more precision, especially during high motion activities like running and cycling.

Powered by machine learning technology, SmartCapture is an ultra-responsive control mode that allows users to give hand gesture commands to launch, follow, photograph, record, push, pull and land, without the need for a remote controller.

Mavic Air has a maximum flight time of up to 21 minutes. It can fly stably in windy conditions of up to 22 mph (36 kph) and at high elevations of up to 16,404 ft (5,000 m) above sea level. Mavic Air’s remote is the first to feature detachable control sticks that can be stored inside the remote controller for added portability. Its omnidirectional antennas placed on the foldable landing gear help increase signal coverage to deliver a maximum range of up to 2.5 miles (4km) with 1080p real-time video transmission when flying with the remote controller. When in Sport mode, Mavic Air flies at speeds of up to 42mph (68 kph) and is compatible with DJI Goggles for an immersive FPV flight experience.