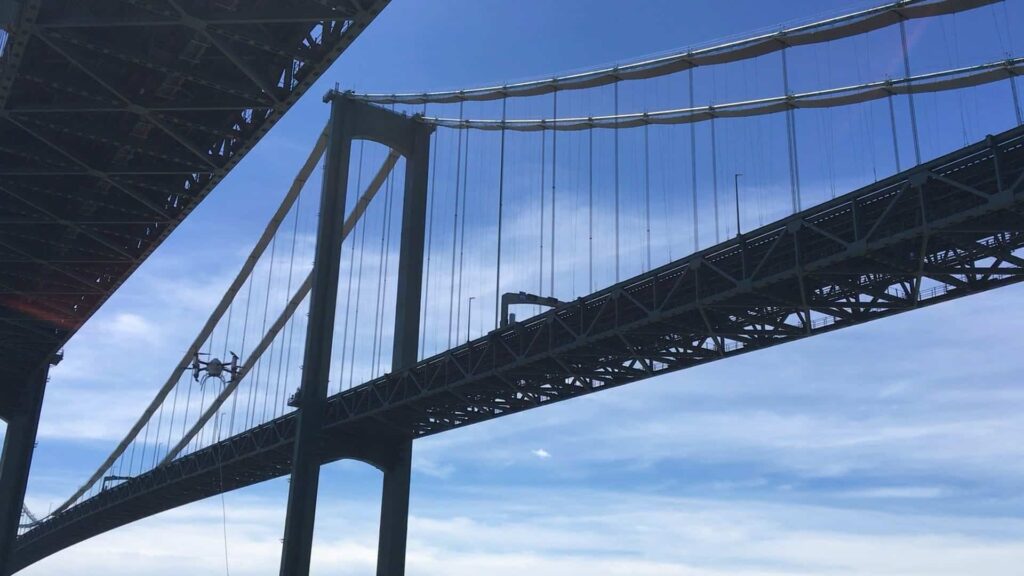 The Delaware River Bay Authority (DRBA) has announced that, using a drone that can both fly and swim, the first combination aerial and underwater bridge inspection was successfully conducted on the Delaware Memorial Bridge Twin Spans, through a collaborative effort with Rutgers University-New Brunswick (RU-NB) and SubUAS LLC. This hybrid unmanned vehicle, known as the Naviator, was developed at Rutgers School of Engineering with Office of Naval Research (ONR) funding. The Naviator has also previously been used to conduct demonstration air/water flights from a 100-passenger car ferry vessel at the Cape May Ferry Terminal.

Researchers in the Department of Mechanical and Aerospace Engineering at Rutgers-New Brunswick, under the direction of School of Engineering professor F. Javier Diez, developed the Naviator prototype in 2013, with subsequent technologic advancements to its propulsion, buoyancy and control systems. Rutgers School of Engineering is an official Federal Aviation Administration (FAA) unmanned aerial systems (UAS) testing facility, conducting research that will help the FAA integrate drones safely into the nation’s airspace. Rutgers Center for Advanced Infrastructure and Transportation (CAIT) has been supporting Naviator’s development, with Michael O’Connell acting as the Pilot in Command for the bridge demonstration and test flights of the Naviator.

“The Naviator’s ability to seamlessly and rapidly transition from flying in the air to maneuvering underwater provides tremendous opportunities for a number of industries and naval operations,” said Diez. “As these recent tests demonstrated, what previously might require a helicopter, boat, and underwater equipment, the Naviator was able to complete as a single deployment with fewer complications and in less time.”

“We’re pleased to be able to participate in this test demonstration,” remarked Thomas J. Cook, executive director of the DRBA. “Our infrastructure assets are subject to rigorous inspection programs on an annual basis and drones have the potential to make these inspections significantly safer and more cost efficient. The ability to have a single autonomous vehicle inspect piers or vessels both above and below the water line is no longer science fiction.”

With continued interest and funding from government and corporate partners, the Naviator research team continues to develop further enhancements and applications valuable for not only bridge inspections, but for ocean floor mapping, search and rescue operations, critical infrastructure, harbor security and more.

“The Naviator drone’s ability to repeatedly transition from water to air in less than two seconds has opened up novel markets that will find these capabilities advantageous,” said Mark Contarino, vice president of technology, SubUAS LLC. “Our long-term partnership with Rutgers, DRBA, and our sponsor ONR, continues to provide invaluable insight into future enhancements and applications of this amazing technology.”