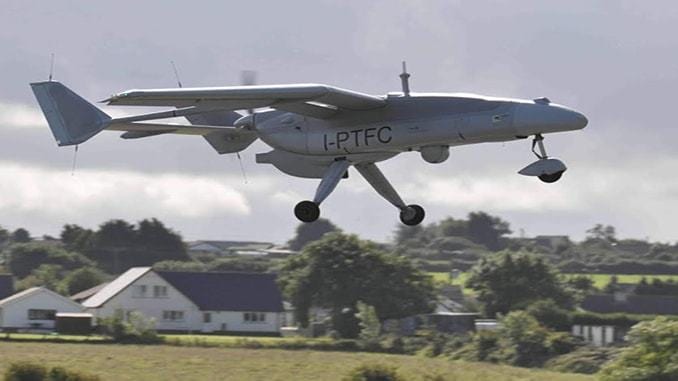 Leonardo has announced that it has partnered with the certified air operator Heli Protection Europe (HPE) to offer surveillance and reconnaissance services via the operation of remotely piloted air vehicles (RPAS) on behalf of civil customers such as police and emergency responders. Leonardo aims to provide services that involve the gathering and management of data for missions such as firefighting, environmental monitoring, migration flows, humanitarian relief and border control. The announcement was made at the 2017 Paris Air Show.

The partnership is a move towards being able to operate aircraft like the company’s Falco safely in ‘non-segregated’ or civil airspace, allowing Leonardo to bring its ‘drones as a service’ model to a new set of missions. Falco aircraft can carry payloads such as electro-optical and infrared sensors, radars and hyperspectral cameras, making them well suited to missions including the monitoring of landslides, fires and oil spills and for modern farming techniques.

Leonardo has provided surveillance and imagery services via the operation of its own fleet of Falco RPAS on behalf of customers for a number of years, including for the United Nations for its MONUSCO peacekeeping mission in the Democratic Republic of the Congo (DRC). Under Leonardo’s surveillance contracts, as well as designing, manufacturing and maintaining the remotely-piloted aircraft, the company’s pilots and payload operators actually conduct the missions, providing and where required interpreting surveillance data for the customer.

By operating with HPE as a certified air operator, Leonardo will demonstrate that its Falco RPAS can, in accordance with HPE’s safety management system and guidelines from international authorities, safely carry out critical operations. The implementation of a safety management system will go towards meeting the requirements of international authorities and customers for reduced risk and compliance with stringent safety standards.