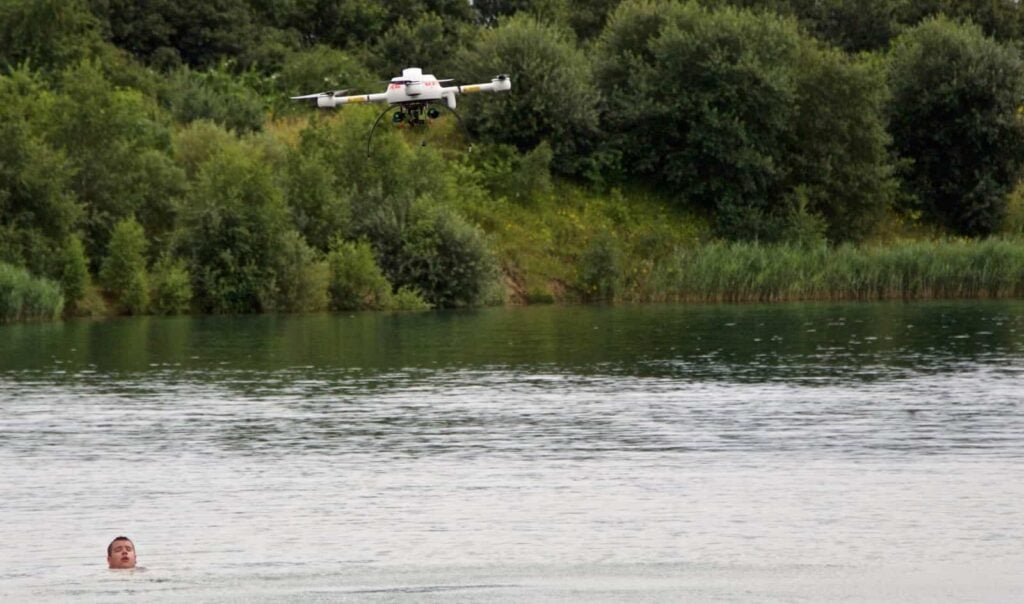 microdrones has collaborated with the DLRG Horneburg/Altes Land e.V. (German Lifeguard Association) to simulate a mission to rescue a drowning swimmer, demonstrating the life-saving potential of a tactic that combines unmanned aerial vehicles (UAVs) and a compact rescue device called RESTUBE.

Crowds watched from the banks of the Elbe River as the UAV rapidly flew to the person in distress and dropped the RESTUBE, which automatically inflated. The swimmer was able to grab onto the RESTUBE and float until they could be reached by a human lifeguard and brought back to safety.

“An adult drowns in approximately 60 seconds and a child in only 30. All too often, this is not enough time for the victim to be reached by a lifeguard,” explained Christopher Fuhrhop, founder and CEO of RESTUBE. “Flying over the water is a much quicker way to reach the victim. By combining UAVs and RESTUBE flotation devices, we are able to buy the drowning person valuable time that could very well mean the difference between life and death.”

The UAV used in the rescue was the microdrones md4-1000. This quadcopter drone features specially developed motors, carbon fiber housing, highly efficient batteries, and an integrated GPS system that allow the UAV to fly and stay in position in strong winds over the water. md4-1000 was equipped with an imaging camera that streamed live to the specially trained lifeguard operating the drone, allowing them to easily see the precise location to drop the RESTUBE flotation device.

RESTUBE has previously won the gold German Founders Award, the most significant prize for entrepreneurs in Germany. RESTUBE has shown great potential in numerous rescue applications.

“One of the greatest obstacles to rescuing a drowning swimmer is that they panic and we often can’t reach them in time,” said Robert Rink from the DLRG Horneburg/Altes Land e.V. “After seeing what I saw here today, I have no doubt that drones will play a significant role in the near future of water rescue – and that we’ll see less fatalities as a result.”

Rink outlined other possibilities for using microdrones quadcopters to solve common issues in lifeguard rescue scenarios. Some of these included:

“We were very pleased today to be able to show off the potential of this approach to rescue,” said Sven Juerss, CEO of microdrones. “Days like these are what motivate the team at microdrones to strive for new solutions. Days when our technology comes together with others’ in ways that change the world for the better. We’re very proud to work with innovative organizations like RESTUBE, DLRG Horneburg/Altes Land e.V., and many others on UAV solutions that save lives.”