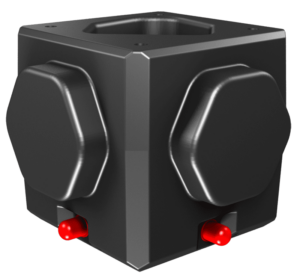 ADCOR MAGnet Systems, LLC, a developer of sensor fusion technologies, has announced the development of its new drone technology, the Pharos smart antenna.

The Pharos is a smart antenna for drones and robotic platforms that forms a directional, high gain beam and keeps it always pointed to the drone control station, regardless of the drone’s motion. It can be used on both sides of the link, the ground control station, and the drone. It is an electronically-controlled tracking antenna with no moving parts.

Unlike conventional omni-directional antennas that waste energy in all directions, the Pharos concentrates the available power where it is most needed. Working in conjunction with the Pixhawk autopilot (a version with its own autopilot is also being developed), the antenna activates the side facing the UAV, boosting reception and range. A second Pharos can also be used on the aircraft, keeping ground control in aim at all times. The Pharos is also circular-polarized, granting immunity to polarization losses and multi-pathing signals.

Possible uses of the Pharos antenna are:

The Pharos antenna can be used with any type of drone – aerial, land-based (rovers) or maritime (boats) – to extend the range of the system.

ADCOR MAGnet Systems’ Kickstarter campaign for the Pharos can be found here.