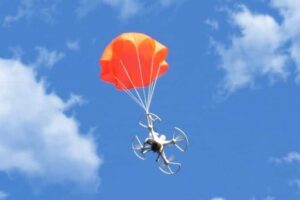 Start-up company SkyFallX has announced that, following the unveiling of its fully autonomous parachute system for drones, the company is now seeking strategic partners to help enter mass-production. The purpose of the system is to reduce danger to people and property on the ground.

The SkyFallX parachute system uses on-board sensors to monitor a drone’s flight. If the unit detects unsafe conditions a parachute is automatically deployed, slowing the descent of the drone while simultaneously sounding an audible alarm to warn people on the ground. The decision to deploy occurs in a fraction of a second. Because the system works automatically there is no need for the drone’s operator to trigger the parachute. This automatic capability is especially critical when the operator can no longer see the drone, as in the case of a “fly away.”

SkyFallX has flight tested the hardware and software.

The SkyFallX system can be mounted to a variety of existing small drones in much the same way as after-market cameras. SkyFallX has applied for domestic and international utility patent protection for the system. This same patent-pending technology can be scaled to fit larger drones.