silent-falcon-uas-technologies News By Mike Ball / 11 May 2016 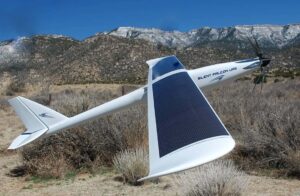 Silent Falcon UAS Technologies has announced that its solar electric Silent Falcon Unmanned Aircraft System (UAS) has successfully performed flights to demonstrate the effectiveness of using the system to inspect and monitor oil and gas production and distribution assets. The flights were performed over 2 days in northwestern New Mexico for a leading international oil and gas company and were flown under the direction of Indiana State University in compliance with the FAA COA issued to them permitting them to conduct these flights. Silent Falcon believes this is the first time a fixed wing, long range and long endurance unmanned aircraft system has been used for this purpose in the continental United States.

The flights were performed using 2 different payloads – an electro optical/infrared full motion high definition video CM100 payload made by Ascent Vision, and a payload built by Silent Falcon containing a Niatros Gas Imaging MidWave Infrared Video Camera made by IRCameras. The flights were flown over a wide area over numerous wells, compressors, tank batteries and pipelines. The purpose of the flights was two-fold – to provide visual inspection of these assets and to detect “fugitive hydrocarbon emissions” or leaks.

The CM100 payload was used to provide aerial visual inspection using its high definition and infrared video cameras. The Niatros Gas Imaging payload was used to detect leaks and to inspect liquid levels in tank batteries. These capabilities are critical to environmental compliance and effective management of oil and gas production and distribution infrastructure.

The video evidence and associated metadata collected from the flights was streamed live to the Silent Falcon ground control station during the flights, and conclusively demonstrated the effectiveness of using the Silent Falcon for these purposes. Post processing of the video and metadata collected was done by Matrix International, providing detailed analysis and exploitation of the video and data. This is the first time that leading edge technologies in unmanned aircraft systems, sensors and data analysis and exploitation have been combined to provide real time and in depth information for oil and gas companies seeking data to support environmental compliance, production and distribution management.

“We are excited to be a part of this ground breaking demonstration that proves the effectiveness of using the Silent Falcon UAS for such an important commercial application. Our ability to stay aloft for extended long range missions, quickly change payloads, and provide both live streaming video and data as well as post flight processing, analysis, exploitation and dissemination of the data collected underscores the effectiveness of the entire Silent Falcon system in both flight operations and post flight data analysis. We are grateful for the opportunity to team up with all involved in this first ever application of UAS technology” said John W. Brown CEO of Silent Falcon.