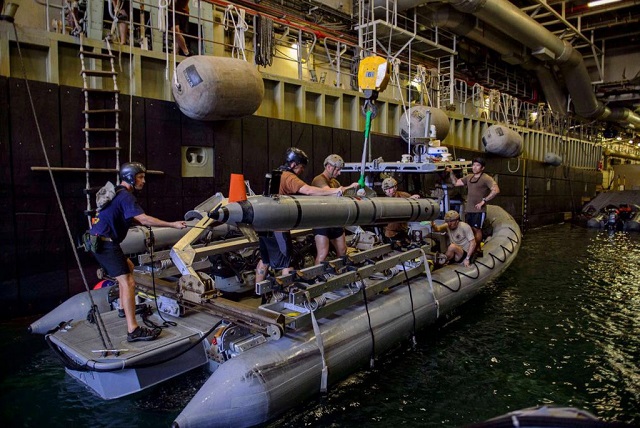 QinetiQ has announced that it has been awarded a £1m contract by the UK Ministry of Defence (MOD) to provide a demonstration system to explore the integration of unmanned surface and underwater vehicles into Royal Navy operations. The system includes displays, software and computing infrastructure and is to be fully transportable and capable of integrating unmanned systems from multiple suppliers. QinetiQ will be working with the Mine countermeasures and Hydrographic Capability (MHC) team in the MOD’s Defence Equipment and Support (DE&S) organisation.

The demonstrator will play a central role in the mine warfare themed aspects of Unmanned Warrior, the Royal Navy’s showcase of unmanned systems due to be held in October 2016. The activity will take place around the BUTEC facility in Scotland, operated by QinetiQ on behalf of the MOD under the Long Term Partnering Agreement (LTPA)

After the Unmanned Warrior exercise, the command and control system will be operated by the Royal Navy’s Maritime Autonomous Systems Trials Team (MASTT) as part of their suite of systems under evaluation and trials.

The new project follows a £4.2m contract with the Defence Science and Technology Laboratory (Dstl) to deliver a similar command and control demonstration system for the co-ordination of multiple unmanned vehicles. It gives the MHC programme the means to fully understand the technology risks and performance boundaries for unmanned systems and to explore how to integrate equipment into an overall capability. As such, it complements work on the UK-French Maritime Mine Counter Measures programme and the UK Sweep capability demonstrator as the newest of the MHC demonstrators.

The objective of the overall programme is to minimise the number of bespoke screens and controls needed to conduct missions and improve efficiency through increased levels of system-to-system communication, minimising the risk of human error by reducing the burden on operators.

Both projects will be delivered by QinetiQ leading a team comprising BAE Systems, Thales, Seebyte and Atlas Elektronik UK.

The work is being led by QinetiQ’s Maritime Systems team, working as part of the QinetiQ Maritime Autonomy Centre (QMAC) in Portsmouth. QMAC was established to accelerate the UK’s adoption of autonomous systems by facilitating their design, development, testing and evaluation.

Sarah Kenny, Managing Director for QinetiQ’s Maritime, Land and Weapons business, said: “This contract is a real opportunity for the maritime defence enterprise to demonstrate successful transition of technology from the research domain to the end user. The project pulls together a number of separate research programmes and integrates these with existing equipment to fully enable RN MASTT planned activities at the same time as supporting the MHC Assessment Phase. QinetiQ is delighted that QMAC is already delivering value to the RN and I look forward to what promises to be an exciting future for this growing part of our business.”

Based on established mine countermeasures tools and components developed by a number of previously independent research activities, the solution fuses local and remote sensor data and is hosted on the Dstl Open Architecture Combat System (OACS). Integral mission planning and management applications enable operation of a range of vehicles from different suppliers, all from a single operator workstation.