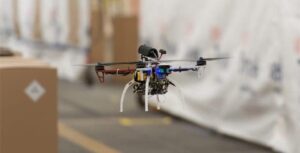 A FLA quadcopter self-navigates around boxes during initial flight data collection using only onboard sensors/software. Image courtesy of DARPA.

The initial phase of data collection for DARPA’s Fast Lightweight Autonomy (FLA) program has been deemed an encouraging success. During the test flights, the quadcopters navigated around obstacles and achieved target speeds of 20 meters per second.

DARPA’s FLA program aims to develop and test algorithms that could reduce the amount of processing power, communications, and human intervention needed for unmanned aerial vehicles (UAVs) to accomplish low-level tasks, such as navigation around obstacles in a cluttered environment. If successful, FLA would reduce operator workload and stress and allow humans to focus on higher-level supervision of multiple formations of manned and unmanned platforms as part of a single system.

FLA technologies could be especially useful to address a pressing surveillance shortfall: Military teams patrolling dangerous overseas urban environments and rescue teams responding to disasters such as earthquakes or floods currently can use remotely piloted unmanned aerial vehicles (UAVs) to provide a bird’s-eye view of the situation, but to know what’s going on inside an unstable building or a threatening indoor space often requires physical entry, which can put troops or civilian response teams in danger. The FLA program is developing a new class of algorithms aimed at enabling small UAVs to quickly navigate a labyrinth of rooms, stairways and corridors or other obstacle-filled environments without a remote pilot. The program seeks to develop and demonstrate autonomous UAVs small enough to fit through an open window and able to fly at speeds up to 20 meters per second (45 miles per hour)—while avoiding objects within complex indoor spaces independent of communication with outside operators or sensors and without reliance on GPS.

DARPA researchers recently completed the first flight data collection from the common quadcopter UAV platform that three research teams are using for the program. The flight test data validated that the platform—which uses a commercial DJI Flamewheel 450 airframe, E600 motors with 12″ propellers, and 3DR Pixhawk autopilot—is capable of achieving the required flight speed of 20 meters per second while carrying high-definition onboard cameras and other sensors, such as LIDAR, sonar and inertial measurement units. During the testing, researchers also demonstrated initial autonomous capabilities, such as “seeing” obstacles and flying around them at slow speed unaided by a human controller.

“We’re excited that we were able to validate the airspeed goal during this first-flight data collection,” said Mark Micire, DARPA program manager. “The fact that some teams also demonstrated basic autonomous flight ahead of schedule was an added bonus. The challenge for the teams now is to advance the algorithms and onboard computational efficiency to extend the UAVs’ perception range and compensate for the vehicles’ mass to make extremely tight turns and abrupt maneuvers at high speeds.”

The three performer teams are Draper, teamed with the Massachusetts Institute of Technology; University of Pennsylvania; and Scientific Systems Company, Inc. (SSCI), teamed with AeroVironment.

The test flight and data collection took place at Otis Air National Guard Base, Cape Cod, Massachusetts, in a former aircraft hangar that was transformed into a warehouse setting with simulated walls, boxes and other obstacles to test flight agility and speed. The test run also resulted in several crashes. “But the only way to achieve hard goals is to push physical systems and software to the limit,” Micire said. “I expect there will be more flight failures and smashed quadcopters along the way.”

With each successive program milestone flight test, the warehouse venue will be made more complicated by adding obstacles and clutter to create a more challenging and realistic environment for the UAVs to navigate autonomously.

“Very lightweight UAVs exist today that are agile and can fly faster than 20 meters per second, but they can’t carry the sensors and computation to fly autonomously in cluttered environments,” Micire said. “And large UAVs exist that can fly high and fast with heavy computing payloads and sensors on board. What makes the FLA program so challenging is finding the sweetspot of a small size, weight and power air vehicle with limited onboard computing power to perform a complex mission completely autonomously.”

The FLA program’s initial focus is on UAVs, but advances made through the program could potentially be applied to ground, marine and underwater systems, which could be especially useful in GPS-degraded or denied environments.