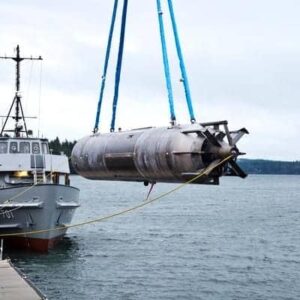 The US Navy has announced that it has tested its newly developed Common Control System (CCS) software architecture with a submersible unmanned vehicle during a series of underwater missions at the Naval Undersea Warfare Center Keyport in Puget Sound, Washington.

The CCS successfully demonstrated its capability to provide command and control to a surrogate Large Displacement Unmanned Undersea Vehicle (LDUUV).

CCS is a software architecture with a common framework, user interface and components that can be integrated on a variety of unmanned systems. It will provide common vehicle management, mission planning, and mission management capabilities for the Naval Unmanned Systems (UxS) portfolio.

During the test events, operators from Submarine Development Squadron 5 (SUBDEVRON 5) Detachment UUV used CCS to plan and execute several surveillance and intelligence preparation missions. The CCS sent pre-planned missions, via radio link, to the LDUUV’s autonomous controller and displayed actual vehicle status information to the operators during the test. The vehicle was able to maneuver to the target areas and collect imagery.

“These tests proved that operators could use CCS from a single global operations center to plan, command, and monitor UUVs on missions located anywhere in the world,” said Capt. Ralph Lee, who oversees the Navy’s CCS program at Patuxent River, Maryland. “This event also showed us that CCS is adaptable from the UAV [unmanned air vehicle] to UUV missions.”

“We had a really talented group of people working on this project,” said Vern Brown, who supports the CCS Advanced Development team based in China Lake. “It was exciting taking the CCS concept of controlling an undersea vehicle from inception early in the year to a successful in-water demonstration.”

The Director for Unmanned Systems’ (OPNAV N99) roadmap intends for CCS to be compatible across all domains – air, surface, undersea and ground. The Navy initially plans to deploy the CCS on unmanned air vehicles. It will provide common vehicle management, mission planning, and mission management capabilities for the Naval UxS portfolio.