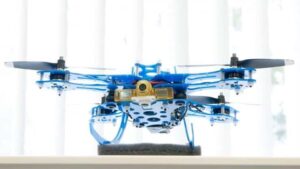 Swiss university ETH Zurich has announced that Qualcomm Technologies, a major developer of drone processors, has adopted as standard the PX4 software created by Lorenz Meier, a doctoral student in computer science. Qualcomm recently unveiled its latest drone platform, known as “Snapdragon Flight”, to which the PX4 software is integral.

According to ETH Zurich, the software is likely to become the gold standard for drone flight controllers in the next few years. “PX4 has the potential to become the backbone of the rapidly growing drone industry. The PX4 software will be to drones what Android is to many smartphones,” says Meier, who is working on his doctorate in the Computer Vision and Geometry Group led by Professor Marc Pollefeys.

Meier attributes the software’s excellent prospects to the following: PX4 already provides the infrastructure for flight control on thousands of systems, “and the partnership with Qualcomm will expand this success model to the next generation of technology,” he says. In the years ahead, drones will be capable of completing far more complex tasks and evading obstacles. With this in mind, PX4’s range of functions is being constantly enhanced, says Meier, who is convinced that “in the future, more and more drones will take to the skies all over the world using ETH-developed technology.”

The parallels with Android are no accident: PX4 is open-source, i.e. its source code is freely available to all interested parties. Any drone manufacturer can use this code free of charge and tailor it to their own needs, just as smartphone manufacturers are able to do with Android. Moreover, anyone can enhance PX4 with their own software, like apps, in order to add special functions such as camera controllers. The computer scientist is confident that “the modularity that the app concept provides is a USP and one of the main reasons why manufacturers like Qualcomm put their faith in PX4.”

Compared with existing control software for drones, PX4 offers two key advantages: the program massively simplifies drone flight, while also making it much safer. Among other things, the software allows drones to take off or land autonomously, as well as to follow specific objects, such as surfers riding the waves or mountain bikers on a feverish downhill descent.

Although Meier is the initiator of Pixhawk and the lead developer of PX4, he is by no means the only person to have worked on the software. It came into being thanks to a worldwide team of developers working under the ETH doctoral student’s leadership. “Many people have participated in the development of PX4,” he emphasises. It took countless man-years of work to program PX4, way beyond what a single individual could possibly achieve. “Nevertheless, we can say with a clear conscience that PX4 essentially emerged from the ecosystem surrounding ETH Zurich.”

“Over the past seven years, the project has undergone an astonishing evolution,” says Meier. He started the Pixhawk project, from which the PX4 software emerged, in 2008. It was a “side project”, he says, started of his own accord and in parallel with his master’s degree. This was made possible by a scholarship he received from the ETH Excellence Scholarship Opportunities Program (ESOP). Over the course of his subsequent PhD, the project grew ever larger; Meier built up a global community to help him achieve his goal of developing a professional drone platform.

PX4 has been available since 2011; “I would describe the system as ‘complete’ since 2014,” explains the researcher. The third generation of PX4 is now ready for use.

Over time, the project also caught the industry’s attention. The e-commerce giant Amazon Prime Air was among those to make a donation, helping to finance Meier’s doctorate. And when Qualcomm adopted the source code, PX4 had finally made its breakthrough.

PX4 is also used in the world of research; for example, it is used by several ETH laboratories, such as the Autonomous Systems Lab for AtlantikSolar and the Institute for Dynamic Systems and Control in the Flying Machine Arena, as well as by the Robotics and Perception Group at the University of Zurich. In addition, scientists at other renowned universities, such as MIT or Stanford, use PX4 for their research drones.

The researcher sets out two key factors that have contributed to the project’s success: “For one thing, Professor Marc Pollefeys, who supervised my work, and ETH Zurich as a whole are supportive of open-source endeavours; in addition, the entrepreneurial spirit among ETH’s researchers meant that PX4’s development was consistently geared towards application in industry.”