Researchers at the German Aerospace Center (Deutsches Zentrum für Luft- und Raumfahrt; DLR) have successfully landed UAV Factory’s Penguin BE UAV, travelling at 75 kilometres per hour, on the roof of a moving car. 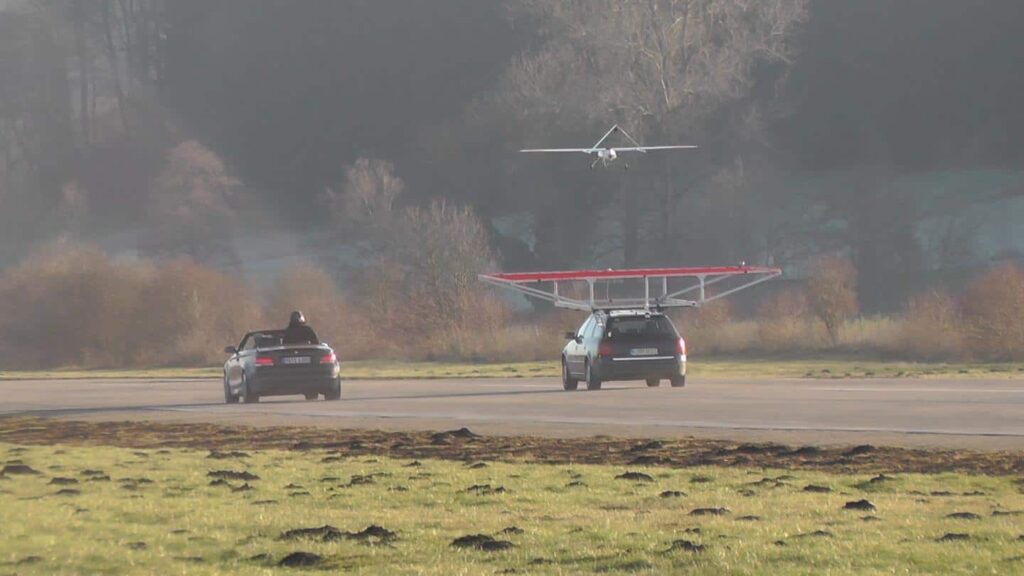 Combining technologies from the fields of robotics and UAVs, researchers from the DLR Institute of Robotics and Mechatronics have developed a system that enables a fixed-wing aircraft to land autonomously on a moving ground vehicle. This system has now been successfully tested using a three-metre, 20 kilogram, electrically powered fixed-wing UAV during flight trials at Mindelheim-Mattsies airfield in Bavaria. To accomplish this, the researchers fitted a special platform equipped with a number of optical markers to the roof of a car. The aircraft is able to navigate to a position – accurate to within 50 centimetres – above the four-metre-long by five-metre-wide mobile platform. An optical multi-marker tracking system recognises the landing platform and performs a highly accurate calculation of its position relative to the ground vehicle. The landing is then carried out under computer control.

The major advantage of this system is that the movement of the UAV and the ground vehicle are synchronised in real time using the developed algorithms. With both vehicles moving at the same velocity, the landing resembles a vertical helicopter landing when seen from the ground vehicle. Thereby, the horizontal velocity components are close to zero, making the landing phase simpler and safer. In the experiments performed to date, flight operations safety rules required a driver to be present in the car. The driver received calculated control commands via a graphical display, which instructed faster or slower driving. In the future, in practical applications, a robotic vehicle without a driver could be used.

Designed for civil applications in the fields of remote sensing and communication, the system could be applied to ultralight solar-powered aircraft that complement conventional satellite systems while flying in the stratosphere. In the event of a disaster, this could support crisis management through live situation reports, replace failed communications networks or provide data on climate change. Eliminating the landing gear significantly increases the payload capability of a solar-powered aircraft. This in turn creates more space for scientific instruments. The system also simplifies landings in adverse weather conditions including crosswinds or wind gusts.

The work was partly funded by the EU project ‘EC-SAFEMOBIL’ and complemented the group’s activities in the field of stratospheric flight research. For example, last year an unmanned glider was successfully launched from a high altitude balloon at 20 kilometres in the scope of the High Altitude Balloon Launched Experimental Glider (HABLEG) project.