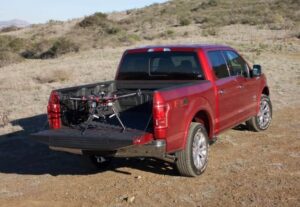 Ford and DJI have announced a challenge to develop software to allow vehicles and drones to become more capable and efficient working together.

Working with DJI, Ford has invited innovators to participate in the DJI Developer Challenge to create drone-to-vehicle communications using Ford SYNC AppLink or OpenXC. The goal is a surveying system for the United Nations Development Program to inspect emergency zones inaccessible to even the most versatile vehicles.

The technology could allow United Nations first responders to earthquakes or tsunamis to quickly deploy drones able to survey and map hardest-hit areas – all from the cab of an F-150 truck.

“At Ford, we are driving innovation in every part of our business to help make people’s lives better,” said Ken Washington, Ford vice president, Research and Advanced Engineering. “Working with DJI and the United Nations, there is an opportunity to make a big difference with vehicles and drones working together for a common good.”

The mobility challenge is part of Ford Smart Mobility, the plan to take the company to the next level in connectivity, mobility, autonomous vehicles, the customer experience, and data and analytics.

Developers are tasked with creating software that would allow an F-150 and a drone to communicate in real time. The United Nations’ rapidly deployable surveying system ideally would work like this:

In a disaster, an emergency response team would drive an F-150 as far as possible into an emergency zone caused by an earthquake or tsunami.

Using the Ford SYNC 3 touch screen, the driver could identify a target area and launch a drone by accessing an app projected through Ford SYNC AppLink. The drone would follow a flight path over the zone, capturing video and creating a map of survivors with associated close-up pictures of each.

Using the driver’s smartphone, the F-150 would establish a real-time link between the drone, the truck and the cloud, so vehicle data can be shared. Data will be relayed to the drone so the driver can continue to a new destination, and the drone will catch up and dock with the truck.

Developers will be able to use vehicle data available through SYNC AppLink or the OpenXC platform to create a seamless drone-to-vehicle communications experience.

Though this challenge has a specific mission, the software eventually could allow drone-to-vehicle applications in agriculture, forestry, construction, bridge inspection, search and rescue, and many other work environments in which vehicles are space-, height- or terrain-limited.