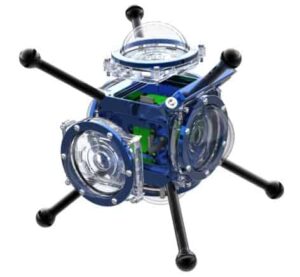 The most significant upgrade to the 360Abyss is the 360Heros Bullet360 control board system enabling users to simultaneously operate the rig’s six GoPro cameras by plugging them into an internal wired interface. The system is triggered magnetically and features controls for turning cameras on and off and firing the camera shutter buttons for both video and photos underwater.

The 360Abyss v4 dive housing is rated to 1,000 meters and certified to 500 meters with neutral buoyancy in salt water. The rig features six individual pressurized camera compartments to keep components separate and secure.

“These upgrades are going to revolutionize underwater virtual reality filming,” Michael Kintner, CEO and founder of 360Heros, said. “The 360Abyss v4 solves many of the challenges VR content creators face when working with multiple cameras underwater such as conserving battery supply and triggering cameras simultaneously for video and audio sync.”
“We’ve discovered in our tests while filming at 120 frames per second that we’re seeing a better, more consistent frame sync than what can be achieved syncing cameras with a WiFi remote.”

The 360Heros Bullet360 control board system includes dedicated input and output ports for multi camera installations that can control up to 50 or more cameras simultaneously. This technology will also be incorporated into future products for filming 3D 360 video underwater.

The 360Abyss v4 has an anodized 6061-T5 aluminum core to act as a heat sync to help prevent overheating in a small pressurized chamber. The ability to turn the cameras on and off underwater also combats battery consumption.

The 360Abyss’ 3/8″ threaded corner mounting points have also been upgraded to aluminum for improved durability and strength. Additionally, the 1-inch ball joint allows universal connection with film accessories such as lighting and mounting. The unique remote triggering system allows the 360Abyss v4 to be operated above water, below water, from the inside of a submarine, on ROVs, research vessels and many other remote dive triggering solutions.