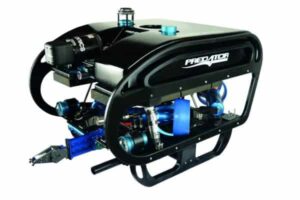 Seatronics, a developer of marine electronics technologies, has announced that it has performed a successful demonstration of its Predator Remotely Operated Vehicle (ROV). During the demonstration the vehicle triggered a Percussion Actuated Non-electric (P.A.N.) disrupter subsea, whilst maintaining station keeping during the live fire mission.

Manufactured and developed by Seatronics, the Predator ROV has been designed to function in all market sectors due to its compact and portable structure, ensuring easy deployment and operation.

Seatronics established the Predator ROV Elite System as a Bomb Squad Capable Improvised Explosive Device (IED) ROV specifically designed to perform demonstrations in conjunction with Great Eastern Group (GEG) for the US Maritime Bomb Squads. A demonstration of the unit was conducted in April 2015 in response to requirements outlined by the nation’s bomb squad community and the Port of Los Angeles / Long Beach Port Dive Operations Group (PDOG).

Euan Mackay, vice president of sales, Seatronics Inc., said, “Feedback received from the demonstration proved to be very positive, categorising the Predator ROV Elite System as a very capable ROV with great potential for underwater counter IED projects. The attendees recognised the system’s power, effective station keeping ability and low cost basis as key beneficial features. The Predator’s ability to hold station was made possible with the use of the SeeByte CoPilot software, which was developed in conjunction with Seatronics and refined to address the specific needs of the FBI and PDOG teams. The trials and client comments enabled the Seatronics and GEG team to identify areas for ROV enhancement to capitalise on the functionality for counter IED missions, including lowering the overall system weight, improving mobility as well as successfully integrating the P.A.N. disruptor function onto the unit.”

Initial demonstrations resulted in an invitation for Seatronics to demonstrate the Predator ROV Elite System at the Underwater Post Blast Investigators Course in Bluffton, South Carolina, USA, hosted by the FBI Counter-Improvised Explosive Device Unit (C-IEDU), along with the South Carolina Law Enforcement Division’s (SLED) Bomb Squad. Attending the course offered the opportunity to demonstrate the Predator ROV Elite System to a variety of Public Safety entities in a real world environment.

“The capability demonstration culminated with the Predator successfully live-firing a P.A.N. disruptor subsea, while maintaining full control using the vehicle’s SeeByte CoPilot system. The Predator is the first ROV in its class to achieve this prestigious accolade.”

Robert Von Loewenfeldt, senior special agent, South Carolina Law Enforcement, added, “The Predator ROV Elite System’s cameras positively identified a suspected IED and the P.A.N. was fired from the ROV’s Operator’s Control Unit. The firing of the P.A.N. had little effect on the Predator’s ability to maintain station keeping, making it easy for the operator to see the effect the P.A.N. round had on the target. Unlike most ROVs, the Predator ROV Elite System offers a truly remote solution to the underwater IED problem.”