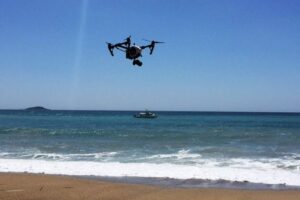 The New South Wales government has announced that drones will be trialled and aerial surveillance boosted on the North Coast as the government fast tracks the rollout of its $16 million shark strategy.

Minister for Primary Industries Niall Blair visited the NSW Mid North Coast to make the announcement, which will also include the trial of smart drum lines to better protect surfers and swimmers this summer.

“There is no easy way to reduce risks for swimmers and surfers. We are delivering on a commitment to test the best science available, including new technologies, as we try to find an effective long-term solution to keep our beaches safe,” Mr Blair said.

“These are the first of several trials that will get underway across the state’s beaches this summer as we take an integrated approach to working out a long-term solution.”

The first field tests of drones began at Coffs Harbour. The trials will test the effectiveness of drone technology in shark attack mitigation by feeding images back to the operator in real time, using GPS coordinates.

Mr Blair also announced smart drum lines, recommended in an independent report into shark technologies, will be trialled. The first line will be deployed at Ballina.

“Experts attending the shark summit in Sydney spoke in favour of this technology and I’m pleased to announce initial testing will get underway next week,” he said.

The NSW Government has also fast-tracked the delivery of two 4G listening stations which will be positioned at Sharpes Beach at Ballina and Clarkes Beach Byron Bay to provide real time tracking data of tagged sharks.

A further eight listening stations are making their way to NSW and will be installed at: Tweed Heads, Lennox Head, Evans Head, Yamba, Coffs Harbour, South West Rocks, Port Macquarie, and Forster. Ten others will follow.

In addition to these measures, the NSW Government has increased aerial helicopter surveillance on the North Coast. Helicopters will fly at least three hours each day, weather permitting, from 1 December until 26 January 2016, flying from Byron Bay to Evans Head twice daily.

Aerial surveillance will continue between Newcastle and Wollongong and will start in areas on the South Coast.