Autonomous Solutions Inc. (ASI) has partnered with Ford to further develop ASI’s software and hardware components that enable autonomous, robotic operation of test vehicles. The industry-first technology saves time and spares human drivers from such physically demanding tasks as driving over curbs and through potholes in durability testing. 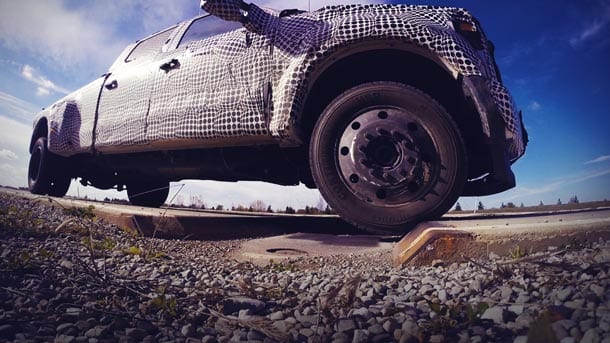 “We’re proud to work with Ford to help further develop this technology and to be granted a license from Ford Global Technologies for their patented bell crank components,” said Mel Torrie, CEO, ASI. “The enhancements we’ve made with Ford will improve the durability, reliability and performance of these systems – allowing for even more accurate testing and higher quality vehicles.”

Robotic durability testing includes command and control software as well as a robotics platform installed in the test vehicle that controls vehicle steering, acceleration, braking, transmission, and more. Ford-developed bell crank actuators control the throttle and brake pedals with a metal rod. The module is set to follow a preprogrammed course, and the vehicle’s position is tracked by cameras in a central control room and via GPS accurate to plus/minus one inch.

Through ASI’s Mobius command and control software, operators have the ability to create paths and events for vehicles. An operator can establish repeatable paths that return more precise data results than previously possible due to the robotic platform’s precision.

The innovative technology is helping to ensure the all-new 2017 F-Series Super Duty – Ford’s toughest, smartest, most capable Super Duty ever – is Built Ford Tough. Super Duty has undergone the equivalent of years of abuse and durability testing in a short amount of time to ensure it will hold up to a lifetime of the hard work its owners expect.

Ford has granted a patent license to ASI, providing the company rights to incorporate and use its bell crank components in the systems ASI sells to other automakers and suppliers to test cars, trucks, buses and military vehicles.

In use since 2013, Ford’s latest generation of bell cranks has seen significant improvements in reaction time and accuracy of the throttle and brake. Patented new design changes simplify installation, resulting in reduced installation time. Other changes enable fewer modifications to test vehicles and improved system performance with better component response. The system can quickly be deactivated, allowing a test engineer to gain control of the vehicle from the driver’s seat.