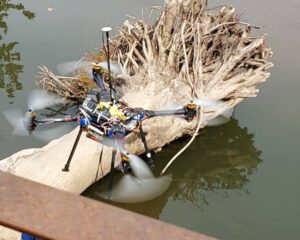 Shafer, Kline & Warren (SKW), a provider of surveying and engineering services, has announced that it has tested tethered drone technology developed by Assistant Professor of Engineering Travis Fields at the University of Missouri-Kansas City (UMKC).

At UMKC, Fields has developed a provisionally patented drone tether system with a battery backup; he spoke about the technology and its applications at a Missouri Society of Professional Engineers – Western Chapter meeting. SKW approached Fields about using the drone for bridge inspections, and arranged for the drone to be tested and used at one of SKW’s inspections – the first time a tethered drone has been used for bridge inspections in the U.S.

Fields has worked with Associate Professor of Civil and Mechanical Engineering John Kavern to develop the drone prototype, which is powered by a gas generator and captures footage on a memory card while streaming the footage to a monitor and goggles. During the field test, Fields operated the drone while SKW engineers viewed the live footage and provided direction and feedback based on their inspection experience and needs.

During a bridge inspection, inspectors must be within arm’s length of each bridge structure in need of inspection, which can involve inspectors using scaffolding, extension ladders or harnesses to reach some of the joints and bridge members.

“The use of a drone would allow us to get to location on a bridge without putting our personnel in a dangerous situation,” said Gary Strack, senior project manager at SKW. “It also can give us better digital information that we can preserve and use for future inspections.”

The tethered drone included primarily off-the-shelf equipment except for the tether and battery backup system developed by Fields, which addresses several challenges to developing a drone for this purpose.

“You can fly forever as long as you keep gas in the generator,” said Fields. “The tether also keeps it close, so if something goes wrong, the tether will break and you have one or two minutes of backup to land it. Plus, because you are attached to the ground, the tether gets you out of the realm of the FAA where you are considered an aircraft.”

After the inspection, SKW provided Fields with feedback about camera refinement and adjustments to improve its ability to capture footage of bridge deterioration and corrosion needed by inspectors.

“In addition to the camera improvements, we have a few different improvements we are working on for the power system to substantially increase the payload,” said Fields. “I am hoping the next time SKW is out, we can come back out and test again.”

Strack also said he hopes the partnership continues as the technology is refined for this use.

“I look forward to continuing to work with Dr. Fields to develop this technology,” said Strack. “It would give us another tool in our toolbox and help keep our staff safe during inspections. For us, safety is always our top priority.”