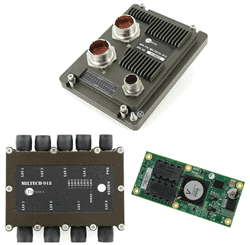 MilSource, a distributor of military-grade Ethernet connectivity solutions, has announced that Techaya has released a new major platform upgrade to its MILTECH 904, MILTECH 912, MILTECH 918 and MILTECH 919 military-grade managed Ethernet switches. A new firmware platform adds Layer 3 static routing capabilities along with enhanced Layer 2 switching, security and management functionality to new products, while installed base products can be upgraded through a free firmware update.

The new enhancements include:

Layer 3 Static routing, allowing for on-device IPv4 and IPv6 static routing between VLANs without having to add a router upstream. This reduces the amount of equipment, weight, and cost on mobile military platforms.

Security functions, including accounting, authentication and authorization (AAA) via TACACS and/or RADIUS servers. With the addition of Authorization Levels, multiple users can have up to 15 different levels of access to switch management to greatly enhance the security of any network.

Management functions, such as DHCP server, SSHv2, SNMPv1/v2c/v3 Agent and IPv6 management, to enhance compatibility with most standards-based networked devices.

“Techaya’s compact, ultra-compact and board level solutions first revolutionized ruggedized Ethernet switching for the military and UAV market in terms of size, weight, power and cost (SWAP-c),” said Ronen Isaac, general manager of MilSource. “Now these groundbreaking compact devices will lead the way in terms of functionality, speed and security. It’s amazing that the functionality available in an Ethernet switch which is the size of a credit card used to require the space of rack-mounted units.”