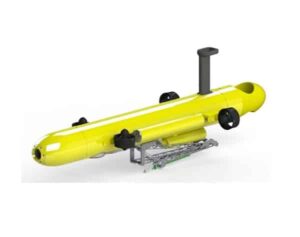 Australia’s Queensland University of Technology (QUT) has announced that it has developed the world’s first autonomous robot designed to seek out and kill the crown-of-thorns starfish (COTS), which are devouring the world’s coral reefs.

Conceived by QUT doctors Matthew Dunbabin and Feras Dayoub, the COTSBot drone patrols just a foot or two off the seafloor and is outfitted with stereoscopic cameras to give it depth perception. It is also equipped with five thrusters to maintain stability, and a GPS system. The drone is designed to patrol for up to eight hours, and when it encounters its target, the COTSBot injects it with a fatal dose of bile salts using a syringe. The robot can deliver more than 200 lethal shots of bile, which are harmless to everything else on the reef.

“Human divers are doing an incredible job of eradicating this starfish from targeted sites, but there just aren’t enough divers to cover all the COTS hotspots across the Great Barrier Reef,” Dr. Dunbabin said in a statement. “We see the COTSBot as a first responder for ongoing eradication programs – deployed to eliminate the bulk of COTS in any area, with divers following a few days later to hit the remaining ones.”

Due to overfishing of the marine life that eats them, the COTS population has exploded recently and allowed the starfish to feast on the world’s coral reefs. Research suggests that COTS are responsible for about 40 percent of the Great Barrier Reef’s coral loss.

One feature of the COTSBot that separates it from other drones is its ability to learn. The robot has been trained to identify COTS by using thousands of images of COTS collected on the reef. If is unsure about whether something is actually a COTS, it will take a photo of the object rather than injecting it. The photo will then be examined by a human and the feedback will be incorporated into the robot’s memory.

The COTSBot has already completed its first sea trials in Queensland’s Moreton Bay to test its mechanical parts and navigation system, and is shortly expected to begin working the reef autonomously.