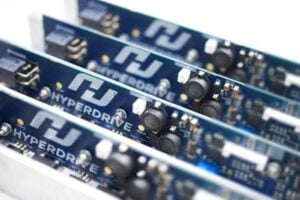 Hyperdrive Innovation Ltd and OXIS Energy Ltd, developers of battery technologies, have announced that the two firms will be amalgamating their expertise to work on an Ultra-Low Temperature Battery (ULTB) project. This project will explore the feasibility of a high energy density battery chemistry with innovative packaging and control electronics that will be capable of operating in one of the harshest environments in the world. Such a battery would open up new avenues for research using unmanned vehicles and autonomous systems – for example, allowing the British Antarctic Survey (BAS) to significantly increase autonomous scientific measurements made in the Antarctic without increasing transport costs or emissions.

OXIS Energy will develop a low temperature electrolyte for Lithium Sulfur (Li-S) rechargeable battery chemistry and Hyperdrive Innovation Ltd will gestate a chemistry-agnostic battery management system and packaging that will withstand and outperform the current lead-acid battery solutions. This project will be led by Hyperdrive Innovation with an advisory input from BAS as they will be the first customer for the project output. The resulting technology will lead to a follow-on mid-stage programme to develop a high energy density rechargeable battery that will operate at -80 °C. OXIS and Hyperdrive will then look to expand the use of this technology to adjacent markets.

Hyperdrive’s Managing Director Stephen Irish says “The superior energy density offered by lithium sulfur makes it well suited for portability, especially in vast, remote locations like the Antarctic where flight is the only method of transport and operations are restricted by resources and weather windows. We’re particularly excited to have the opportunity to prove our Battery Management System (BMS) technology for use with this emerging cell chemistry working with BAS to tackle the challenges of designing an energy system capable of withstanding extremely cold temperatures.”

The use of Lithium Sulfur chemistry is innovative because it is a next generation battery technology that has a theoretical energy density far higher than any Li-ion solution. OXIS has been developing Li-S cells for over ten years, and has already managed to build pouch cells that are 300Wh/kg, which is more than any Li-ion chemistry can practically achieve. Li-ion as a technology is already on the market as a range of chemistries, each with their own strengths and weaknesses, while Li-S is only just beginning to enter the market now.

According to Huw Hampson-Jones, CEO OXIS Energy, “It is very difficult to secure the effective utilisation of battery systems in extreme temperatures, whether hot or cold. OXIS Li-S cell technology can operate at up to 80c, but to do so at the other extreme of -80c is very challenging. The programme will have an important impact on vehicles operating in cold climates such as North America and Northern European countries.”

The successful completion of this project, which is supported by Innovate UK’s energy catalyst, will put the UK at the forefront of battery technology with the potential for a unique range of high energy density batteries for cold climate operations.