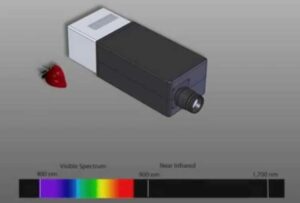 The State of Montana has announced that it has awarded research grants to Montana State University, Resonon and Impulse Accelerated Technologies, who are collaborators on a project that aims to improve hyperspectral imaging technology with a focus on robotics, food sorting and UAV vision applications.

“These state-of-the-art projects will significantly and positively impact Montana’s opportunities for economic growth,” said Governor Steve Bullock. “Through investments in innovative research and commercialization, we’re not only supporting cutting-edge projects and jobs today, but we’re also helping to define what Montana’s economy looks like for years to come.”

Hyperspectral imaging refers to the measurement of hundreds colors at a point (pixel) instead of the typical three colors (RGB) that conventional color cameras measure. This means that hyperspectral cameras can generate 100 times the data as conventional color cameras. In applications that need to process large quantities of hyperspectral data in real-time, such as in food sorting, special devices called Field Programmable Gate Arrays (FPGAs) are required to process the immense amount of data being generated. This is where Impulse Accelerated’s expertise comes into play, since their tools enable FPGAs to be programmed at a high level in the C language.

Resonon’s current systems use a standard PC to process the data from their hyperspectral cameras. However, the data cables from the camera to the PC and the CPU itself limit the data processing to a fraction of what the hyperspectral cameras are capable of generating. Currently the system has a spatial resolution of 640 pixels, 240 colors, and can take pictures at a frame rate of 140 frames/sec. The MSU team demonstrated that an FPGA based system would be capable of a resolution of 2048 pixels, 512 colors, and a frame rate of 340 frames/sec. The additional resolution would allow the detection of smaller defects, the additional colors would allow finer gradients of color to be classified, and the faster frame rate would allow the sorting to be done much faster. Rand Swanson, President of Resonon says that systems this capable would be very valuable in industry for a number of sorting and inspection applications.

“This technology has surprisingly broad application,” explains Brian Durwood of Impulse. “The same algorithmic architecture that visually sorts shells from almonds can also be used to more quickly scan the sea and ‘sort out’ a person overboard as differentiated from the surrounding sea, from an automated camera suspended under a Coast Guard plane.”