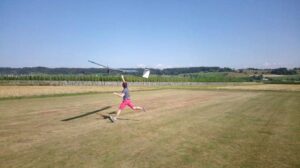 ETH Zurich, a Swiss engineering and technology university, has announced that the AtlantikSolar Unmanned Aerial Vehicle (UAV), developed by the university’s Autonomous Systems Lab, has broken the flight endurance world record for the vehicle’s weight class.

This flight is a first important milestone in verifying the UAV’s ability to stay airborne for multiple days while providing telecommunication services in large-scale disaster-scenarios or live-imagery during industrial sensing and inspection missions.

The flight was performed at the Rafz, Switzerland, RC-model club airfield. Take-off was performed via hand-launch, and after 2316km and 81.5 hours – 4 days and 3 nights – of flight, the aircraft landed safely and with fully charged batteries. The fully charged batteries would in theory have enabled the aircraft to continue the flight through the night again. With the exception of take-off, the aircraft was in fully-autonomous operation 98% of the time, and less than 2% in autopilot-assisted mode via its Pixhawk autopilot.

The long-endurance flight provided very helpful insights on flight performance. The average level-flight power consumption in calm conditions (e.g. during the night) was shown to lie in between 35-46W. Maximum power input throuh the 88 SunPower E60 cells during the day was around 260W. With this performance data, the aircraft managed to achieve fully-charged batteries (100% SoC) before the time of maximum solar radiation (solar noon, occuring around 13:30). After flying through each of the three nights, the aircraft on average reached a minimum state of charge of 35% at around 07:45 local time and thus still shows sufficient energetic safety margins for worse environmental conditions (such as longer nights, cloud cover or winds).

The flight also subjected the aircraft to a wide range of environmental conditions. Among them were thermal updrafts during the first evening/night (causing a remaining state of charge of 40% ), and downdrafts during the second night (remaining state of charge 32%). The last hours of the flight were marked by upcoming thunderstorm clouds and the strongest winds – up to 60 km/h – the aircraft was ever subjected to. Although the ground station was partially damaged by the winds, the airplane could be landed safely in autopilot assisted mode when the winds had calmed down.

Having demonstrated the multi-day endurance capability of the bare UAV platform, the AtlantikSolar UAV project will now focus on extended endurance flights with payloads, including optical and infrared cameras as well as atmospheric sensors. These payloads will also be carried during a long-endurance and long-distance mission of more than 12 hours and 400km that has been planned to take place in the Brazilian rainforest.