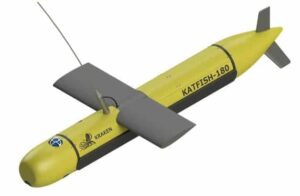 The primary objective of the KATFISH project is to develop an actively controlled, intelligent towfish as a platform for real-time ultra-high resolution seabed mapping system, based on Kraken’s Miniature Interferometric Synthetic Aperture Sonar (MINSAS) technology and Real-Time SAS Processing algorithms.

The KATFISH system is comprised of an actively controlled smart towfish, winch and handling subsystem and operator console. The winch and handling subsystem provides the capability to launch, tow, recover and stow the tow fish. The entire system is designed to be quickly installed and removed from craft of opportunity platforms and is packaged for easy transportation.

Conventional side scan systems are limited in that they only provide high resolution imagery at short range. KATFISH produces ultra-high resolution seabed imagery with constant resolution to full range. The additional information provided by KATFISH delivers a detection and classification capability that cannot be achieved with a conventional sidescan sonar.

The capability of generating centimeter-scale resolution in 3D also provides significant performance improvements in the detection, classification and identification of small seabed objects.

Sonar data is transferred from the transceiver to the processing unit via a Gigabit Ethernet network interface. The sonar operation is controlled from a graphical user interface (GUI) on a notebook computer. The operator sets the sonar parameters in the sonar control window, while depth, imagery and other sensor data are captured and displayed by Kraken’s INSIGHT application software.

KATFISH is currently under development and has successfully completed proof-of-concept sea trials. The system is now being commercialized with a series of planned technical milestones.