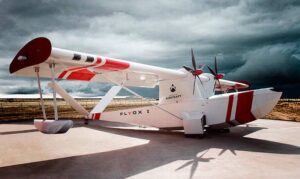 Singular Aircraft, a designer and manufacturer of unmanned aerial vehicles (UAVs), has announced that the company’s Flyox I UAV has successfully completed its first test flight. Singular claims that the Flyox I, which has been in the research and development phase for four years, is the largest amphibious UAV currently available.

The test flight took place in Hofn, Iceland, 457km away from Rejjavik. Other commercial aviation traffic continued at Hofn, and the flight team had sufficient confidence in the Flyox that only very limited restrictions were in place.

The flight takeoff was conducted on a paved runway and the aircraft’s landing was made in a soft, damp swampy area. Both takeoff and landing were successful and demonstrated the versatility and capability of the Flyox. The results of these tests will allow Singular Aircraft to implement necessary improvements and start the production phase.

With this amphibious unmanned aerial platform, designed and developed under rigorous standards of quality and safety to operate in remote areas, Singular aims to offer its customers a viable alternative to traditional UAVs.

The Flyox I comes in four basic configurations: surveillance, firefighting, cargo and agriculture. Based on customer requirements, Singular will configure the platform, incorporating accessories and all necessary modifications to optimize the aircraft for its intended operation.

The Flyox has a payload of 1850kg with a range of 8300km. It has a high endurance of over 50 hours in surveillance mode, the capacity to take off and land on any surface and the ability to be customized according to customer requirements. The low maintenance costs and simplicity mean that the aircraft can be managed locally anywhere in the world.

Singular Aircraft are highly optimistic about the future of Flyox and, encouraged by the initial results, will continue to production with the aim of establishing the aircraft as a reference point within the UAV market.