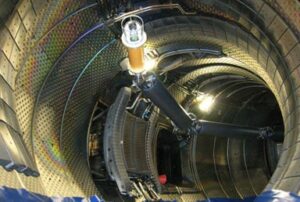 Energid Technologies, a developer of robotics systems and software, has announced that it has deployed software on the Articulated Inspection Arm (AIA) robot developed by the Institute for Magnetic Fusion Research (IRFM) of the French Atomic Energy and Alternative Energies Commission (CEA), and the Institute of Plasma Physics, Chinese Academy of Sciences (ASIPP).

The complex, snakelike AIA robot is used to inspect tokamaks – plasma confinement devices used for experiments in generating thermonuclear fusion. The tokamak uses a magnetic field to contain plasma, which, due to its extreme temperature, cannot be contained by physical material.

“The inside of the tokamak is a vacuum and can reach temperatures of 120 degrees C,” said Eric Villedieu, the CEA IRFM Program Manager for the AIA Project, “and the walls can be much hotter. If the robot touches anything it risks serious injury.”

Following a proof of concept done on the French Tokamak Tore Supra/WEST in Cadarache, the robot was upgraded and will be tested on the Chinese Tokamak EAST in Hefei before returning to France. The robot requires unique and complex control as its many joints navigate around obstacles and the toroidal shape of the tokamak. The control software must automatically avoid collisions with all surfaces within the vessel and must compensate for the dynamic properties of the robot, like sag.

CEA licensed Energid’s Actin software to be the brains of the AIA robot. Energid, working in collaboration with AREVA and OPEN CASCADE, created a turnkey application layer for intuitively controlling the robot and dynamically avoiding collisions.

“Using Actin’s control system and feature-rich 3D environment made the deployment of the robot much easier for the users,” says Piyoosh Mukhija, Lead Project Engineer for the AIA system at Energid. “It enables the operators to quickly switch between different, powerful control modes that allow a mix of interactive and automated movements.”

The AIA Supervisor software features multiple innovations, including gravitational sag compensation and generalized collision avoidance. The sag compensation algorithm simulates the effect of gravitational forces on the physical robot to compensate during live control operations. Collision avoidance optimizes the position of the robot in real-time to ensure collision free operation.

“We’re seeing increasingly complex robots being used for increasingly complex tasks,” says Neil Tardella, CEO of Energid Technologies. “This is where Actin shines. And we are especially excited about this deployment in China, the world’s largest and fastest growing market for robotics.”