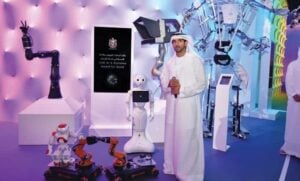 The UAE has announced that its “AI & Robotics Award for Good” US$ 1 million award, created to find innovative solutions in civilian application of robotics and artificial intelligence, has begun accepting entries. This is the first edition of the award, and it is open to individuals, teams, universities and companies from around the world.

According to the Organising Committee of the award, the ‘UAE AI & Robotics Award for Good’ aims to encourage research and development in artificial intelligence and robotics to meet challenges in three key areas: health, education and social services. While the winner in the International Competition of the award will take home US$ 1 million in prize money, the award also features a National Competition offering AED 1 million to the winner. The winners will be honoured at a special ceremony in February 2016 ahead of the fourth Government Summit in Dubai.

Submissions for the Award will be received until November 1, 2015, through the Award website. The proposals will be reviewed by a panel of global experts following which 10 applicants from each category in the International and National competitions will be selected for the semi-final round which will be announced on November 22, 2015.

The semi-finalists will be brought to Dubai to give a live demonstration of their working prototype in front of the panel of judges, which includes high-profile experts and specialists in artificial intelligence and robots technologies. The members of the panel of judges will be announced at a later date. In the final stage, the applicants will demonstrate their working prototype, offering a genuine service or solution to a real human need.

Applicants are required to suggest new ways of improving an existing service using robotics and artificial intelligence, or offer new services that could be implemented through these technologies. In addition, the projects should be semi- or fully autonomous and use the most advanced civilian technology available. They should also be safe and economical.