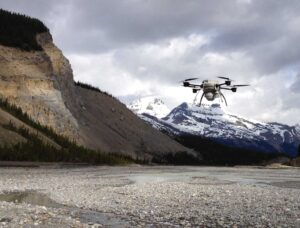 The study, which began three years ago, started out as a way to map fish habitats in the Elbow River using drone technology.

“We started out trying to see what we could measure in rivers using drones, but after the 2013 flood we ended up in a unique position of being able to measure the effects of the flood at an unprecedented level of detail,” says Chris Hugenholtz, Associate Professor and Cenovus Research Chair at the University of Calgary.

In a paper recently published online in The Earth Surface Processes and Landforms journal, the research team found that the flood completely restructured the flow of the Elbow River adjacent to Redwood Meadows.

“The magnitude of the change was catastrophic, such that parts of the river channel now looks nothing like it did before the flood,” said Aaron Tamminga, a PhD student at UBC and lead author on the paper.

Comparing before-and-after maps and 3D models, research revealed that almost three hectares of river bank was carved away by the flood along a one kilometer stretch of the Elbow River, with some banks receding up to 100 meters. Detailed images from the drone also showed that the flood both straightened and widened the river channel and completely re-structured the gravel bed.

Brett Eaton, Associate Professor at UBC, notes that the river bed became armoured by the flood as parts of the bed are now littered with meter-scale boulders. “When we simulate the 2013 flood conditions over the current configuration of the river, we find that the river bed is more stable, which means that it will take an even larger flood than the 2013 event to produce the same magnitude of change in the future.”

Over the course of the summer, Hugenholtz and his colleagues are ramping up efforts to measure the legacy of the 2013 flood on the Bow, Kananaskis and Elbow Rivers. They will also be looking at ways to integrate drones into a decision support framework for disaster management.