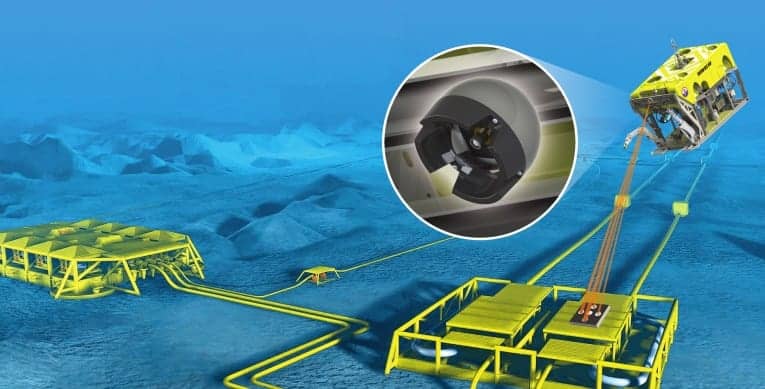 AgilePOSE in Action aboard an ROV

Many of today’s Autonomous Underwater Vehicles (AUV) are deployed to distant areas on long missions and must return to their base to recharge their batteries and download the data that they have collected. This is time consuming and inefficient. Navigation to an underwater docking station is also a possibility, but final navigation into the station itself can be problematic due to increasing navigational errors during transit, and variable currents affecting manoeuvring ability in the vicinity of the dock. If the vehicle can be successfully navigated to the vicinity of the docking station and then guided into the station using the 6 Degree of Freedom (6 DOF) AgilePose intelligent underwater camera and calibrated target, then the capabilities of the AUV are enhanced considerably.

Now, essentially unlimited missions to distant areas of interest or operating areas can continue unabated, until all data necessary for the mission completion has been collected. This ability dramatically increases on-station time, with a corresponding decrease in transit time. If the docking station has data transfer capability, then all mission data can be downloaded sooner, without the need to return to the initial deployment site as well. In underwater environments, acoustic communications telemetry links have limited bandwidth, so the desire to download large amounts of data for post-mission analysis always exists. Data-critical sensor information must be delivered quickly and reliably with a hard connection into the docking station.

In addition to the underwater docking application, the system may be used for precise station keeping of an ROV in the vicinity of an underwater structure or object in order to enable the operator to concentrate on other functions.

“It’s imperative for both military and commercial users to utilize the newest and most efficient technologies such as the AgilePose Intelligent Camera System in order to achieve cost savings and increased efficiency,” said Brian Terry, Agile’s President and CEO. “Our AgilePose™ system provides customers with a cost-effective solution that allows them to address these navigational and stationkeeping challenges.”

AgilePose is an embodiment of Agile’s AgilCam, an intelligent camera system in which image processing is implemented on reconfigurable hardware in the form of Field Programmable Gate Arrays (FPGAs) interfaced directly to a high resolution CMOS image sensor. Employing a complex algorithm, Pose Estimation (POSE) enables evaluation of pose, or position orientation, in six degrees of freedom at the frame rate of the image sensor by observing a set of active or passive target markers of known geometry. Contained in a variety of depth rated pressure modules, the camera itself weighs less than 300 grams and is built to withstand extremes in temperature, shock, vibration and water integrity. AgilePOSE uses a standard USB connector using an RS 232 protocol to plug directly into a computer or on-board network.