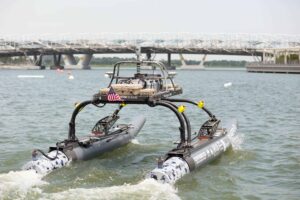 Sparton, a manufacturer of navigation solutions, has announced that its NavEx PHOD-1 Hydrophone was used to create an acoustic sensor by a team competing in the Maritime RobotX Challenge, held in Singapore.

The Robotics Association at Embry-Riddle Aeronautical University (RAER) is a student group that capitalizes on various experience levels and disciplines to accumulate institutional knowledge used by companies such as Boeing and Rockwell Collins, as well as for competition efforts. Embry-Riddle was one of three US collegiate teams (and one of 15 total international teams) selected to compete in the challenge which was cosponsored by the Office of Naval Research (ONR) and the Association for Unmanned Vehicle Systems International (AUVSI) Foundation. The event highlighted the development and demonstration of autonomous surface vehicles.

The RAER team boat, named Minion, is a 16-foot fully autonomous Wave Adaptive Modular Vessel (WAM-V) platform and registered as such with the state of Florida. Its development focused on the challenges autonomous tasks of buoy channel navigation, debris avoidance, docking, target identification, and sonar localization all coordinated by software nodes including state estimation, object classification, mapping, and trajectory planning. These nodes all run in parallel across a set of networked computers for distributed processing.

One of the required tasks in the Maritime RobotX Challenge was to locate an underwater acoustic ping from aboard an unmanned surface vessel. ERAU’s goal was to create a system capable of detecting this acoustic ping as demanded. The search area was set to be at least 40m wide and not more than 100m long. This area was further broken down into equal quadrants. Each quadrant could contain a randomly placed pinger (an underwater acoustic transmitter).

For each competition run, one of these pingers was selected to emit a signal while the others were silent.

The Minion’s task was to search the area and detect the pinging device. Once located, the team had to report which quadrant in which the pinger was located. The pingers were in shallow (4-6m deep) brackish water and the pinger’s latitude and longitude needed to be located within a 3m accuracy.

Additional points were awarded to teams for identifying the actual depth of the pinger within 0.5m. To accomplish this task successfully, ERAU had to develop a hydrophone array, deployment system, data acquisition system, algorithms to extract the pinger signal from raw data, and a method of detecting bearing and distance from the system itself to the pinger.

Early data samples showed a significant amount of multi-path in the signals. The surface of the water, ocean floor, sea walls, and the unmanned surface vessel itself were all potential reflectors that could cause signal degradation. The multi-path made frequency-based isolation exceedingly difficult – the difference in phase between the primary signal and reflections caused phase cancellation. There was also a significant amount of 26kHz noise caused by the PWM frequency used by the platform’s (Minion’s) primary thrusters. This noise was within 20-40kHz range that could be emitted by the target pinger.

The students and faculty that make up the ERAU RobotX team (Team Minion) were tasked to develop a solution to these technical challenges.

The Robotics Association at Embry-Riddle (RAER) had previously worked with and utilized Sparton Navigation and Exploration products such as the GEDC-6E and AHRS-8 inertial sensor systems on previous unmanned platforms for heading and attitude determination. Team Minion, therefore, quickly identified the Sparton PHOD-1 Hydrophone as the appropriate acoustic sensor solution to the challenges they faced.

The Sparton NavEx PHOD-1 Hydrophone is a small, rugged, omni directional broadband hydrophone designed for high-quality performance and realworld durability. Some of the key benefits of the Sparton hydrophones include low noise levels and a low current draw as well as built-in calibration.

Since there is no place to mount hydrophones on an inflatable hull, the ERAU team developed a system that utilized four hydrophones spaced 4-feet apart fore and aft and 8-feet apart port and starboard with an automatic deployment system. Each hydrophone is mounted to a pole which can be raised or lowered on command by one of two linear actuators.

The array of four hydrophones allows the software to use a multilateral approach to determining the position of the pinger. The hydrophones are sampled at 500KHz by a National Instruments DAQ and the difference in timing between the arrival of the pinger signal at each hydrophone is measured. These time differences can be used to calculate a 3D location for the pinger relative to the boat.

Testing with the PHOD-1s consistently provided a high level of reliability and superior quality. The PHOD-1s also proved to be an affordable solution that allowed for direct access to the real time acoustic data required by Team Minion’s DAQ system and signal processor.

The 26kHz noise generated from the vessel’s motor was handled through a notch filter when the original signal was more than 2kHz above or below 26kHz. If the targeted pinger frequency was between the range of 24-28kHz, the motors were powered off in order to isolate the target. Since the pinger’s acoustic signal traveled a shorter distance than the multi-path reflections, the team used a triggering algorithm to detect the first wave period at the known pinger frequency.

Minion is equipped with four Sparton PHOD-1 Hydrophones connected to a high speed data acquisition system. This allows the platform to perform passive sonar localization. When localizing, the platform lowers the hydrophone array and disengages the motors. The platform listens for pings for approximately 30 seconds before raising the array and moving to a new location. The data is then analyzed using a combination of band-pass and noise canceling filters then analyzed for time difference of arrival measurements. From this the location and depth of the ping source is triangulated. Once the source is located, further readings can be taken to improve the accuracy of the result. After a result with a satisfactory error is achieved the module reports the all clear to move on to the next task.

ERAU did not conduct testing with competing hydrophones, but they did do design reviews with such products and chose the PHOD-1 as it met all of the necessary design requirements on system compatibility, ruggedness, and data quality. Due to their prior relationships with Sparton, the PHOD-1 was an excellent choice for Minion.

The competition environment created reliability issues in the data. Therefore, it was critical to avoid introduction of noise or other disturbances through poor sensor dynamics. The PHOD-1 was tested thoroughly in a controlled setting and shown to introduce a minimal amount of noise. The ERAU Minion team deployed the PHOD-1 hydrophones using left and right linear actuators and a connecting rod assembly mounted to the vessel. During competition, they made several attempts at identifying the pinger location using both time of-flight and triangulation of the pinger location using bearings.

Although the PHOD-1 sensor system performed admirably in collecting the necessary data, the shallow water multi-path issues the team encountered prevented them from identifying the pinger location within the 3m accuracy required to score points.

The above data image show the results from the four hydrophones (different colors for each) in detecting a 33kHz pinger during the RobotX competition in Singapore. A 32-34kHz bandpass filter was applied to the data to isolate the pinger’s frequency of 33kHz.

The strong amplitude of the pinger signal can be seen along with the signal distortion caused by the multi-path reflections off the Harbor bottom, water’s surface and vessel.

Despite these issues, Team Minion placed 4th overall amongst the 15 international teams. The Team also received a special Humanitarian award for their unselfishness in helping their competitors be successful.

The ERAU team thinks the PHOD-1 hydrophone sensors are ideal for open ocean acoustic measurements, where the ocean floor and shoreline do not introduce multi-path issues into the data. It is important to remember that a high quality data acquisition system is needed to properly leverage these capabilities.

Despite the shallow water issues they encountered, ERAU recommends the Sparton PHOD-1 hydrophone for underwater acoustic measurements based on its high quality acoustic output.