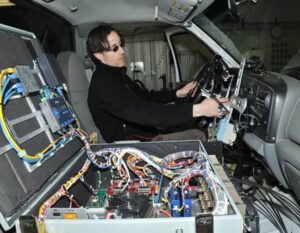 Scientists and engineers at the Naval Air Warfare Center Weapons Division (NAWCWD) have designed a new version of the Shoot-able Remote Threat Ground Target (SRTGT) system. Originally developed to transform a pickup truck into a semi-autonomous unmanned vehicle, the system can now also be installed into additional vehicles.

SRTGT was originally designed to fill 2005 test and evaluation requirements that push limits of target vehicle and control system performance. The system provides state-of-the-art threat representative speed, maneuverability and accuracy while very easy to use and at the best value to the government.

Before this system was created, engineers and technicians remotely and manually drove a vehicle, requiring the operator to control every movement.

“Remotely driving vehicles was a great tool, but the accuracy and dependability varied with every operator,” said Joe Hansen, systems engineer with the NAWCWD Threat/Target Systems Department. “Creating this system gave us a tool that did everything a remote control does and more.”

“SRTGT has been highly reliable and often gets a high-to-perfect customer satisfaction review,” said Hansen.

The new generation of SRTGT is currently undergoing in-depth testing with a range of vehicles.

“We test drive it on the road, check shocks, brakes, air conditioning,” Hansen said. “The air conditioning was critical to keep the system from overheating in the first generation of SRTGT. The new design should cool itself.”

The system consists of an embedded computer, radio, hub, vehicle control processor, cooling fan circuits, actuators, relay box, remote start, Ethernet hub and radio frequency link that sends a 900 megahertz signal to the base station. On top of the vehicle is an RF antenna and a GPS antenna.

The operator sits in a portable operating station and uses a radio frequency line-of-sight link to talk with and track the vehicle.

“I can safely input speeds up to 75 mph, depending on the environment and need of the customer,” said Ingle, team lead. “Before a test, we send an operator in the vehicle over the path we want it to drive. This creates a path on the onboard computer so that during the test, the operator tells the computer to follow the same route at the same speed. It does a lot more than just go from point a to point b. You can control how many g’s you’re going to pull in a turn, choose your speed, acceleration and deceleration rate and much more.”

There are multiple safeguards built into the system to prevent the unexpected.

“A key difference between the SRTGT system and a remote controlled vehicle is safety,” said Hansen, who helped design the first system in 2007. “If it loses contact with the base station, it will go into a range safety mode and come to a safe stop, until it regains radio contact with the operator.”

If the vehicle loses signal line-of-sight with the transmitter, it will stop, unless told otherwise by computer command.

“One of the most valuable gains from this technology is the accuracy and repeatability,” said Webber, who has been involved in the project since its beginning. “The truck will stop within inches of the designated stopping point. It will drive the same exact route and stop at the exact same spot every time.”

“The performance of the SRTGT’s for the warfighter in the field is what is getting us business now,” Webber said. “We go into the field with confidence, but we have a lot of pre-processes that build that confidence. By following safety protocol and walking step-by-step, we create our own luck, and because of that we are successful. The system works not because it is flawless but because the teams that run them take immaculate notes and stay on top of the machines. We do a full systems and safety check every time we fire them up; on the Ford platform and the control platform.”

The SRTGT team works with customers to precisely match their targeting needs. Today, there are several full systems deployed in the United States.

“I was right there in the beginning when we would first build a system, mount it to a vehicle, run operations, come back make adjustments – then run operations again,” Webber said. “We continued this process until we had something we wanted to run with.”