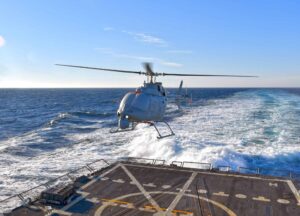 The Fire Scout test team and sailors aboard Dunham conducted dynamic interface testing with the MQ-8C to verify the system’s launch and recovery procedures before the system undergoes operational test next year.

“By better understanding ship operations, we will have a smoother transition into operational test,” said Capt. Jeff Dodge, Fire Scout program manager. “This exercise gives us insight into operating from an air-capable ship and will help us mitigate any risk associated with the system.”

During this underway period, the Fire Scout completed three flights and 32 takeoffs and recoveries. The data collected during these test events helped the team assess the system’s performance at different combinations of wind and ship motion and get a better understanding of how the aircraft behaved around the ship, he said. 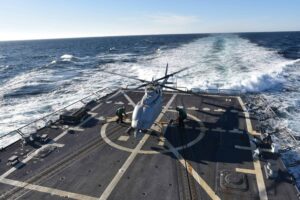 The MQ-8C Fire Scout sits on the deck of the guided-missile destroyer, USS Jason Dunham (Photo by Northrop Grumman)

“This system has the potential to enhance the fleet’s ability to conduct airborne-over the horizon searches and targeting that would expand a myriad of missions, while maintaining a conceivably small support element,” said Cmdr. Darren Dugan, commanding officer for DDG 109. “I’m excited to be part of this testing and evaluation period for the MQ-8C.”

The MQ-8C Fire Scout is an upgrade to the existing “B” variant, which first deployed in 2009. With its larger airframe, the “C” can fly nearly twice as long and carry three times more payload than its predecessor.

The MQ-8C team is leveraging lessons learned from MQ-8B operations. The “B” variant has routinely flown from frigates and most recently from the littoral combat ship (LCS).

Since most of the MQ-8Cs components are identical to the “B” variant, the team has high confidence that it will operate effectively from the ship, Dodge said. The system performed “very well” during the yearlong ground-based tests in Point Mugu, California so he anticipates seamless integration with Dunham this week.

Teamed with the manned MH-60 helicopter, the MQ-8 Fire Scout extends the range and endurance of ship-based operations. It provides unique situational awareness and precision target support for the Navy.

In addition to 30 MQ-8Bs that have been delivered by Northrop Grumman, the Navy plans to procure a total of 40 MQ-8Cs to support LCS and other air-capable ships.