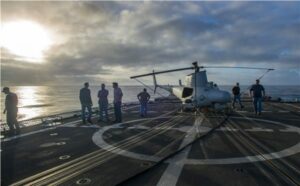 The 10-day demonstration off the coast of Southern California met all the Coast Guard’s objectives, performing launch and recovery operations, conducting various simulated search patterns and transmitting data and imagery.

UAS have the potential to significantly increase the surveillance range and capabilities of our Coast Guard cutters and this demonstration will help to inform the service on the best way to proceed forward with the acquisition of the right unmanned capability in the future, said Coast Guard Lt. Cmdr. Dan Broadhurst, UAS platform manager.

“This Navy team has extensive and exclusive unmanned helo expertise and we’re happy to provide those lessons learned to the Coast Guard,” said Bob Ernst, Multi-Mission Tactical UAS program (PMA-266) chief engineer at Naval Air Station Patuxent River. “Our team worked rapidly over the last 11 months to ensure we were ready to support their efforts as well as test new system capabilities for the Navy.”

Earlier this year, the Navy teamed up with the U. S. Coast Guard Research and Development Center to coordinate the procurement and installation of MQ-8 equipment in support of the technical demonstration.

“The existing MQ-8 system was already 90 percent compatible with the cutter-class,” said Harsha Desai, lead engineer for the Coast Guard integration effort. “To minimize the impact to the ship, we developed a mobile ground control station configuration for our Mission Control System.”

The Navy will also benefit from this new configuration. The mobile GCS provides flexibility to rapidly respond to tasking and has the potential to drive down future integration costs, Ernst said.

The team also used the event as an opportunity to test an MQ-8B equipped with radar, which will increase the situational awareness and threat warning in a high-traffic littoral, or close to shore, environment. Deployment with this new capability is planned for 2015.

Since 2009, the MQ-8 Fire Scout has flown more than 14,000 operational hours, primarily in the Mediterranean, Afghanistan and Horn of Africa regions, providing intelligence, surveillance and reconnaissance support to operational forces. It recently made its first deployment with USS Fort Worth (LCS 3) in November.