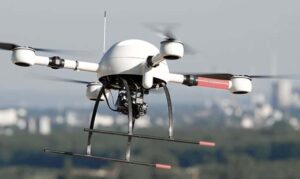 “The Twin Camera Mount System was exclusively developed for Aurizon by our Australian partner APS,” explains Sven Juerrs, CEO of microdrones GmbH. The system is equipped with a Sony A6000 digital camera with a resolution of 24 megapixels and a FLIR infrared camera.

“It is possible to switch between the high resolution photo mode and the thermography mode during flight,” says Juerrs. This support for multiple camera modes speeds up the entire inspection process. During the inspection flights, the md4-1000 quadcopter will provide valuable data, which can be used by Aurizon to perform important maintenance work.

The system has been equipped with a removable 7-inch-display which enables the UAV to work independently from its base station. “The rough and impassable operating conditions of the Australian outback demand a high amount of mobility and flexibility. By using removable displays we take this into account,” says Juerrs.

The base station has also been modified for operation in Australian environments, working wireless and autonomously with integrated batteries and its own display. “The user just needs to remove the lid and the receiving antenna extends automatically. Press the power switch and the microdrone is ready to go,” underlines Juerrs. This may not sound very exciting, states Juerrs, but makes a huge impact in practice: “Once the drone system supports the pilot in the application, he can fully concentrate on his key task, the inspection.”

Due to microdrones’ open interfaces (mdSI2, Downlink-Decoder, etc.) and the professional, smart integration of Australian partner APS’ technology, microdrones is able to develop a large number of customized solutions.

The railway company has high hopes for the acquisition: “Safety is a top priority,” says Alex Harnby, who leads the UAV project for Aurizon. But he is confident that operational failure caused by damages on catenaries and buried cables can be reduced by 50 percent within the next three years, due to the usage of the microdrones. In total, Aurizon will have to survey more than 2,600 kilometres of rail network.