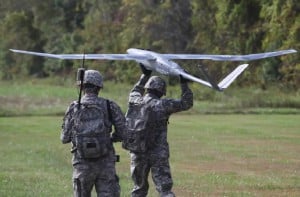 Since The Torrent’s unveiling in May of 2013, industry experts have responded well to the competitive advantages of the small plane, which is the first ever fixed-wing UAS to be designed and developed in Michigan. This lightweight, all-electric, hand-launchable platform is highly regarded for its flight performance, endurance and ease of use. Special emphasis on the airframe design and stability, and cutting-edge battery and propulsion design, allows The Torrent to achieve silent flight durations in excess of six hours on batteries alone and over ten hours with optional solar cells, all while maintaining a cruising speed of 45 MPH. It is man-portable, assembles in minutes, lands without any ancillary equipment and can be packed in a small carry case, making it attractive to both military and commercial users. The Torrent has a wingspan of 12 feet and can carry up to five pounds of payload.

The FAA Experimental Airworthiness Certification is another first for Merrill, making it the first UAS in the Great Lakes States (Michigan, Illinois, Indiana, Ohio, Wisconsin and Minnesota) to achieve such a certification.

“This certification allows us to conduct product development flights, crew and customer training, customer demonstrations, pilot training and demonstrations for other state agencies including the DOD, all within a designated airspace,” says Yackel.

“This has been a long, challenging road, but it is what’s required to be considered a real player in the UAS world,” says James Peters, FAA Accountable Manger from Merrill.

“We submitted the proper documentation for certification just over a year ago and have been in constant contact with the FAA for the last 12 months reviewing details. Our Project Manager for The Torrent, David Herald, and I met with eight FAA representatives this past October in Washington D.C. for a Program Safety Review. The fruits of Merrill’s labor paid off today, when FAA representatives joined us to inspect The Torrent and the flight crew, witness a test flight and ultimately, issue us our Certificate of Airworthiness.”

The FAA requires that all companies operating unmanned aircraft have a pilot in command with a current Commercial Pilot License. Merrill acknowledges their partner, Northwestern Michigan College (NMC), for providing this critical field support.

In addition to the FAA Experimental Airworthiness Certification, Merrill has a current Certificate of Authorization (COA) with Northwestern Michigan College and aims to secure a second COA by first quarter of 2015 with Camp Atterbury in Indiana. The COAs allow Merrill to work with these public agencies and support their activities with The Torrent.