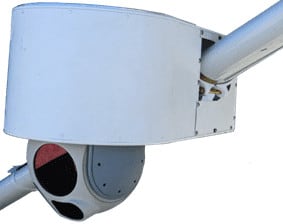 “Infrared stops fire from hiding in its own smokescreen,” says Hart Drobish (President of Courtney Aviation, the Air Attack Operator). “SkyIMD makes an extremely sophisticated tool intuitive for first time users. Without training, Air Attacks see through smoke. Zoomed in, IR identifies fire creeping through retardant that is too late once visible to the naked eye.” Hart is developing IR solutions on multiple platforms to extend coverage.

The Planning Section Chief responsible for intelligence, strategy, and objectives at the Incident Command Post (ICP) operated the FLIR infrared sensor when the cockpit crew was busy managing airspace. The Chief of the Happy Camp Complex fire could click the fire map or touch the live video to “walk around” deep in the burn. The new spot fires discovered were then verified by the aircrew. Using the same remote control, SkyIMD in San Francisco interactively trained the Chief who had never before operated an EO/IR superzoom gimbal. The easy interface took only a few minutes to learn and become a valuable asset.

“The only growing-pain with remote controlling the airborne infrared was that so many people wanted to use it,” says Henri Wolf (SkyIMD CTO and former wildfire tanker pilot). “Since drones are not currently approved for wildfires, some aerial firefighters would like to use the same cameras on a manned-drone parked out of the way, above the congested fire attack altitudes. A ground operated gimbal flown solo, a manned UAV, will provide all the benefits of a UAS, extending ICP’s vision while relieving workload, and has the potential to evolve into an unmanned aircraft in the future.“

SkyIMD and Courtney Aviation are developing techniques to use UAV technology in manned aircraft, as well as to fly active missions collaboratively. Manned UAVs naturally handle the airspace above UAVs (400 ft. altitude ceiling), and below satellites (orbiting at 22,000 miles). Development is in progress to share airspace symbiotically, enabling both manned and unmanned to perform in ways not possible separately.