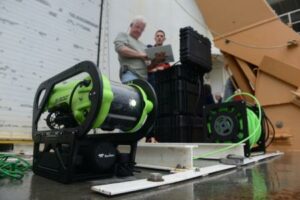 Three ROVs were tested during the Arctic mission

Remotely Operated Vehicles have been used by the Coast Guard for years as diver-replacement tools. The submersible devices are often used for hull inspections, pollution monitoring and the retrieval of objects on the ocean floor, but the Coast Guard has rarely deployed ROVs to the freezing waters north of Alaska. In their ongoing quest to identify technologies for Coast Guard use in the increasingly busy Arctic, the RDC brought not one, but three readily available models for comparative analysis to determine which characteristics are most desirable for an ROV in such an extreme environment.

“Last year, we brought one ROV to test in the ice edge and we had some mixed success with its ability to handle the conditions,” said Jay Carey, ROV project lead for the RDC traveling aboard the Healy. “We wound up with more questions than answers so this year, we brought a model the Coast Guard regularly uses and two larger models to compare their different capabilities against one another in response to a simulated oil spill in the ice.”

Each of the ROV models tested during this year’s exercise featured a few common elements including tethered control and state-of-the-art camera and lighting equipment, but they ranged in size from 10-40 pounds and each used a slightly different means of propulsion through the water. Researchers hoped these differences would help them distinguish the best design characteristics for circumventing challenges they encountered in 2013 with high-humidity conditions in the ROV’s pressure hull, tether pull caused by ice floes and power loss.

“The biggest obstacle we encountered this year was water current,” said Petty Officer 1st Class Adonis Kazouris, an ROV operator from Coast Guard Regional Dive Locker San Diego traveling aboard the Healy. “The ROVs do a great job when the current conditions are within their limitations, but even the largest model ROV had difficulty with the strong currents we encountered.”

The three ROVs operated during the exercise were used in conjunction with an Autonomous Underwater Vehicle, a similar technology that uses a self-guided submersible device to map the ocean using sonar. While the two vehicles may seem capable of the same job, the ROVs possess some distinct qualities that set the two apart while not invalidating the use of the AUV.

“The strength of the ROV lies in its utility, ease of operation and ability to provide live imagery of an area within its immediate surroundings,” said Carey. “ROVs have already proven to be effective in other Coast Guard operations, but every technology we tested has a role to play in contributing to the mission of protecting America’s Arctic waters.”