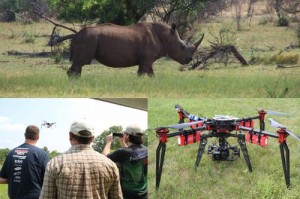 The second largest land mammal on earth, the majestic white rhino is under siege by poachers looking to make big money selling its highly coveted tusks, which in many parts of Asia are thought to contain almost magical medicinal properties. UAV-America, a New Hampshire-based designer and builder of UAV’s is helping a South African game preserve protect the white rhino using a multirotor UAV equipped with infrared thermal imaging and daylight cameras that patrol quietly, safely and inconspicuously from above, transmitting streaming video to the ground.

As CEO of LabWare, a global technology company that develops software for automating laboratory operations, Vance Kershner spent a lot of time in South Africa, where he quickly fell in love with its bush country and wildlife. In TKTKT, he started the Madikwe Conservancy, which today holds more than six thousand animals, including antelope, giraffes, impala, zebra, warthogs and white rhinos.

Unfortunately, the Conservancy’s armed guards face a number of challenges keeping poachers away. First, it can be difficult to detect where white rhinos are at any one time. “You can patrol for miles and encounter nothing,” says Kershner. Detecting poachers can be difficult if they’re hiding in the bush, particularly at night. If the guards detect suspicious activity, conveying an exact location to authorities in the middle of bush country can be a challenge.

Being naturally technology savvy, Kershner came up with the idea for UAV patrols. He hooked up with his friend Jim Faunce, an engineer who has provided technical assistance to the military for Command, Control, Communications, Computers, Intelligence, Surveillance, and Reconnaissance (C4ISR). Faunce found a multirotor product that had the heft and battery life to last 45 minutes in the air carrying a thermal imaging camera, daylight camera, antennae, a controller and transmitter.

Faunce also found UAV-America to help design and acquire the entire solution and integrate all the pieces so they would work together smoothly. “Owner Jim Cooper and his partner Matt Koestner picked up on what we were looking for right away and had very intelligent answers and suggestions,” says Faunce. “They were always very responsive.”

UAV-America provided the basic UAV platform and the design support to choose and integrate the right flight controller, gimbal mount, transmitter, cameras, thermal imaging and other components with the UAV.

UAV-America found a robust controller solution allowing a range of up to 110 Kilometers (Thomas Scherrer Long Range Systems), allowing the pilot to patrol remotely from a long distance. It also can be programmed with a flight plan in advance for fully autonomous missions.

“We’re not committed to any one vendor or manufacturer,” says Cooper. “For the rhino project, we spent quite some time researching, assembling and testing control and video streaming equipment to be sure they would meet mission requirements.”

Thanks to the innovative package, the preserve will soon have an efficient, low-cost solution for aiding patrols in locating white rhino on the preserve. Thermal imaging can identify poachers even if they’re hiding in the bush at night. A built-in GPS allows pilots to communicate exact coordinates if suspicious activity is detected. Kershner also anticipates using the UAS solution for the preserve’s annual aerial surveys and game counts, which until now required renting a helicopter for upwards of $10,000 per day.

Testing has begun in New Hampshire and will move to New Jersey for some limited flying and then a field test in South Africa during the first week in August.

“It’s amazing what a UAV can do for a relatively low price,” says Faunce. “You can set up a flight path, take your hands off and watch in real time, the video transmission and the UAV’s location on a Google Earth Map. If you see something you can have it descend and hover over the area and then take off again. Everything works together like a charm.”

Cooper and Koestner have both found the experience with the Conservancy to be its own adventure. “Taking on projects that haven’t been done before and have no clear-cut solution is what I find the most rewarding,” says Koestner.