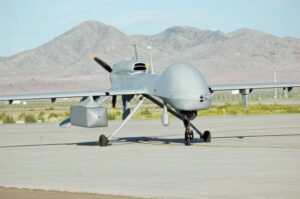 The NERO jamming payload attached to a Gray Eagle UAV.

The NERO project has conducted engineering analysis and aircraft alterations for over two years. The tests that took place from June 2 to June 19, proved that it is technically and tactically feasible to field an effective jammer on an unmanned aerial platform.

NERO is the combat-proven Communications Electronic Attack Surveillance and Reconnaissance, known as CEASAR, jamming capability currently deployed on a C-12 aircraft. The only difference between the two systems is the NERO jamming pod is attached to the Gray Eagle Unmanned Aerial System.

Clay Ogden, a subject-matter expert for airborne electronic attack programs for the Army’s Electronic Warfare Division at the Pentagon, was at Dugway for the testing. 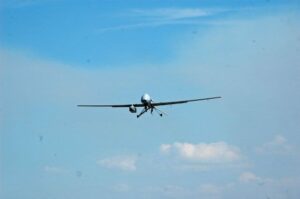 A Gray Eagle UAS above Dugway Proving Ground, Utah, during a testing of the Army airborne electronic attack project NERO.

“The payload was able to operate at full power without adverse effects to the UAS systems,” said Ogden. “This demonstrated the viability of a Gray Eagle based high-powered jamming capability to support the Army’s EW (electronic warfare) counter-communications and broadcasting EW requirements in the future. Results of the flight testing will inform development of the Army’s organic Multi-Function Electronic Warfare capability, which is an integral part of the Integrated EW System of the future.”

The recent conflicts in both Iraq and Afghanistan have increased the demand from deployed troops for airborne electronic attack capabilities. The Army recognized this demand in 2009 and thus the CEASAR pod was developed for the C-12 aircraft to support combat operations. It was only a matter of time until the idea to put the same pod on a UAV was born, and several years later in 2012, JIEDDO funded the NERO project.

“The Army quickly realized they had a need for an organic beyond line of sight communications jamming capability, and so developed the CEASAR airborne electronic attack aircraft to support ongoing overseas operations,” said Ogden. “The next logical step was to put the capability on an unmanned platform to realize cost savings and increased mission times much as we have done with cameras and other [intelligence surveillance and reconnaissance] equipment.”

According to Ogden, NERO flew for a total 32 hours during the flight testing, 20 of which while the jammer was operating. With a constantly evolving strategic environment, the Army will continue to use NERO for experimentation for airborne EW.

“The NERO capability may well be part of the Army’s future Integrated Electronic Warfare System, if it meet’s the Army warfighter’s requirements,” said Col. Jim Ekvall, chief of the Army’s Electronic Warfare Division at the Pentagon. “Airborne electronic attack provides an enormous amount of support to troops on the ground, and with the NERO payload on a UAV, mission times are increased and are more cost effective for the Army.”

Currently the Army does not have immediate plans to place a jammer on a smaller UAV, however the Army’s Intelligence and Information Warfare Directorate has experimented with smaller UAV jammers.

“The Army is contemplating what platform is best suited to conduct airborne electronic attack in the future,” said Ogden. “The CEASAR C-12 aircraft were rapidly developed for a specific mission to meet the warfighter’s immediate needs outside of the normal acquisitions process, and now we know that Army relevant airborne electronic attack works on the Gray Eagle UAS.”

The successful results of NERO testing will be an important asset for developing the Army’s Multi-Function Electronic Warfare capability and the payloads will be used for additional testing for airborne electronic warfare.