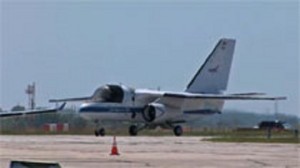 With one crew squeezed into a computer-filled bus and another inside an airborne Lockheed S-3 Viking airplane, experts from Rockwell Collins and NASA teamed up to better determine the future of unmanned aerial systems (UAS) during recent testing conducted at the Eastern Iowa Airport in Cedar Rapids, Iowa. This latest test was the next step in establishing a communication system that will enable UAS to safely operate in the national airspace.

“The number of active UAS’s is only going to grow in the future,” said Alex Postnikov, a principal engineering manager in the Advanced Technology Center (ATC) at Rockwell Collins. “Rockwell Collins and NASA are in an exciting position to ensure there is a safe and secure communications link between the pilot on the ground and the unmanned aircraft in the air.”

The testing, completed last week, was focused on a data link waveform and the ability of a single tower to communicate to multiple aircraft. The waveform will be released as a public resource to help the industry and the Federal Aviation Administration (FAA) develop an appropriate set of rules and requirements for unmanned operations in the national airspace. Last week’s testing was part of the research project’s first phase.

“We tested at different altitudes, different frequencies and through different modes of operation,” said John Moore, principal systems engineer for Rockwell Collins. “We wanted to see if the system operated as we expected it to. We’re happy to say things went very well.”

Moore added that our company will participate in research and testing through 2016. The goal is for the FAA to issue a technical standard order for UAS’s in 2017.