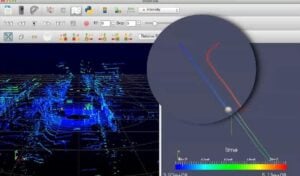 Velodyne’s LiDAR division has released version 2.0 of its free and open-source VeloView visualization and recording software. The software is designed for compatibility with Velodyne’s family of 360°, real-time, 3D LiDAR sensors, including the classic HDL 64E and its compact and lightweight successor, HDL-32E.

Since its introduction last year, VeloView has been instrumental in enabling new customers to get up and running rapidly. With this software, users can view and record HDL sensor data in Velodyne’s proprietary .pcap format in addition to exporting the data frame-by-frame to the more common .csv format. VeloView also includes a “live” mode, where data from up to 64 channels can be viewed in 3D and in real-time, much as a self-driving car sees the world using Velodyne’s HDL sensors.

New in revision 2 is the ability to record and display position packets. This capability is vital when a high accuracy GPS/IMU device is connected to the LiDAR sensor for geo-referencing. PPS signals (pulse per second) from the GPS/IMU device allow for time synchronization between GPS/IMU and the sensor, while the $GPRMC NMEA from the GPS/IMU is being mirrored in the HDL’s position packets. A “map” feature enables the GPS waypoints to be plotted on screen, indicating the path traveled. The accuracy of the plotting is tied directly to GPS data accuracy and limited to updates of one per second.

VeloView was created in partnership with Kitware, a leading developer of open-source 3D visualization software. Both companies are committed to continue offering VeloView 2.0 free of charge, including its source code and libraries.

“Interested parties can base their customized application software on these already existing libraries without having to start from scratch,” said Casey Goodlett, lead developer of VeloView at Kitware. “This will help eliminate programming errors and save software development time, thereby making data collection more productive.”

Additional features in VeloView 2.0 include a ruler for distance measurements, a plane fit tool, a laser selection tool, and the ability to show sequential data in one display (trailing frames). VeloView 2.0 can be downloaded here: http://www.paraview.org/Wiki/VeloView.