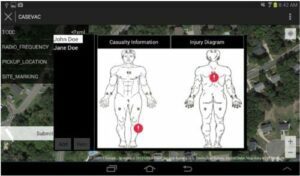 Neya Systems‘ Mission Planning and Management System (MPMS) has been in development for the past three years and is tailored towards providing heterogeneous platform behavior orchestration, while allowing for combined off-line and tactical mission management. Originally developed with unmanned ground vehicles in mind, MPMS has been extended to support unmanned aerial systems and joint operations between the two.

Under this Phase III SBIR, Neya will work with Lockheed Martin to integrate VERTI, which is an extension of MPMS developed under an Army Telemedicine and Advanced Technology Research Center (TATRC) SBIR to focus on casualty evacuation and cargo resupply missions.

VERTI allows for pre-mission planning using an interface that is familiar to mission planners who are already familiar with Air Tasking Orders and existing planning tactics, techniques, and procedures. The pre-mission planning phase is intended to allow an in-field medic or other soldier to rapidly call up a desired mission (e.g. Cargo Resupply), and populate mission parameters such as drop-off location, landing zone conditions, and any flight restrictions.

VERTI moves away from traditional “functional” user interfaces, which focus on direct control of specific payloads, platforms, and sensors. Instead, VERTI presents a context-aware, mission-specific interface that walks the user through the steps required for a particular mission, while allowing him to make changes to critical parameters as the tactical situation changes in real time.

“We are very happy to be partnered with Lockheed on this effort, and feel that the K-MAX, with its successful history of providing autonomous cargo delivery support in Afghanistan, is the ideal demonstrator platform for our new C2 capability,” said Dr. Parag Batavia, president of Neya Systems.

Demonstrating VERTI on K-MAX is a large step towards proving out the capabilities and readiness of this technology.