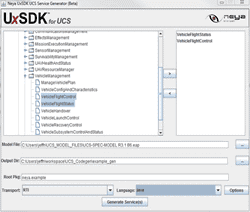 Neya Systems, LLC is pleased to announce Release Candidate 1 of its UxSDK™ for UCS Software Developers Kit. The SDK has been under beta test with select customers for the past 6 months, and has rapidly matured over that time. Neya, which has played a leading role in the development of the UCS Architecture, is providing this SDK to encourage adoption of the standard, and reduce development startup costs. The SDK is particularly well suited for transitioning legacy systems to the UCS Architecture. It lowers the barrier of entry, provides a unified software framework for conformance and testing, allows for development of portable code, and allows for expansion of the UCS model to incorporate new capabilities and services.

UxSDK™ for UCS encapsulates the subject matter expertise of the UCS Architectural Model, and presents an easy-to-use tool that lowers the barrier to entry into the UCS ecosystem and recently deployed UCS repository (http://www.ucsrepository.org). The SDK auto-generates conformant UCS service interface Implementation Classes for application code, allowing software developers to concentrate on their reusable software IP and not on UCS/platform conformance and low-level interoperability with other third-party UCS applications.

Neya have extended the SDK to support multiple Data Distribution Service (DDS) vendors, including RTI, PrismTech, and Twin Oaks. Future roadmaps include the incorporation of JMS and other Enterprise bus standards.

The Beta version included support for Java code generation to RTI’s DDS, while the latest Release Candidate greatly expands on this to add multiple DDS vendor support, and support for C++ code generation as well as Java code generation. This greatly increases code portability, as the application developer only has one API to deal with, while being able to leverage multiple middleware layers. Power users have access to the core internals of the middleware, in order to take advantage of vendor-specific features and capabilities.

As the SDK works directly with the UCS Model, any extensions that are made to the model are automatically supported. This allows for individuals to expand the UCS model, using principled rules of construction, in order to incorporate new services, domains, and capabilities. This “future-proofing” is a significant advantage of using the SDK. This also greatly enhances conformance, as the SDK takes input directly from the model as opposed to a transform or custom version of the UCS model. The SDK goes from model to executable code.

The SDK core features include:

In addition to simplifying the deployment of UCS within legacy systems, the SDK supports the goals of Better Buying Power 2.0 by not requiring runtime royalties or licensing. We provide developer licenses on a per-developer or per-project basis, after which all run-time generated UCS code is completely unrestricted. Companies that integrate SDK-generated code do not owe Neya any runtime royalties on their use of this code. We feel that this greatly simplifies the “make-buy” decision for UCS integration, allows for easier integration of our SDK within government programs, and provides an easy to track licensing model that is a win for all parties.