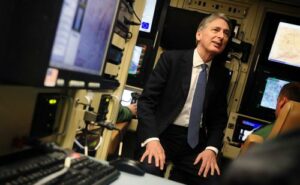 The U.K. Ministry of Defence has, for the first time, opened the doors to its unmanned aerial systems (UAS) control centre, based in the UK. Pictures and footage released Wednesday 18 December, show the high-tech operations room at RAF Waddington, where members of 13 Squadron remotely operate the RAF’s Reaper aircraft in Afghanistan.

Reaper is just one of a range of UAS, including remotely-piloted air systems, operated by UK armed forces, providing vital, life-saving intelligence, reconnaissance and surveillance on operations.

Showing this work is a key way to dispel some common myths about the role of the equipment, which UK forces use predominantly in Afghanistan.

During a visit to RAF Waddington, Defence Secretary Philip Hammond viewed the full range of current and future equipment, including:

Mr Hammond also spoke to a Royal Artillery fire support team commander recently returned from Afghanistan who spoke of the benefits the ‘eyes in the sky’ can provide for troops on the ground. 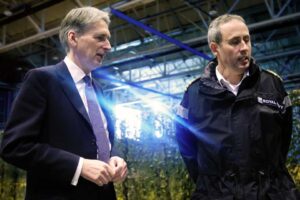 Mr Hammond said: “Vital to our efforts to protect our forces and the people of Afghanistan, this battle-winning technology allows us to understand the situation on the ground more clearly, develop better intelligence, and precisely strike, within our rules of engagement, those who threaten or hurt the people we are protecting.

Much of the criticism of unmanned aerial systems is based on misunderstanding. This event provides a great opportunity to better inform people about these life-saving assets and their variety of purposes.”

Life-saving technology
Speaking at the event, Air Vice-Marshal Philip Osborn, Joint Forces Command Capability Director, praised unmanned aerial systems’ ability to provide ‘persistent surveillance of enemy positions without putting our servicemen and women at unnecessary risk’. He said: “In today’s operational environment, unmanned and remotely-piloted air systems are increasingly vital to keep one step ahead of the enemy, and to save military and civilian lives. 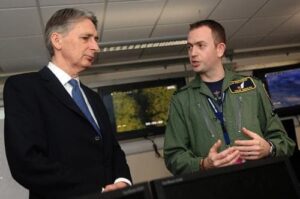 Highly trained and experienced personnel are at the heart of the capability, and human oversight and control is always paramount. This is a capability just like every other across defence; it has skilled and motivated people at its core, people who are in charge of technology and use it in strict accordance with the law.”

Viewing the inside of a Reaper control cabin, the Defence Secretary was able to see how it is guided and controlled at all times by a team of highly trained and skilled people. Pilots, sensor operators and analysts all make decisions in real-time, exactly like the crew of a traditional aircraft.

In over 54,000 hours of operations, the UK’s Reaper, the only armed system used by British armed forces, has fired just 459 precision weapons.

When a precision strike capability is required from RAF Reaper aircraft by ground commanders this is always in accordance with international humanitarian law and the law of armed conflict, and is governed by strict rules of engagement; exactly the same as manned aircraft.

VIDEO: Operational footage
The video below, which shows actual footage from an unmanned aerial vehicle’s onboard camera, shows images of an insurgent firing team with a long-barrelled weapon firing from a roof top in Afghanistan.