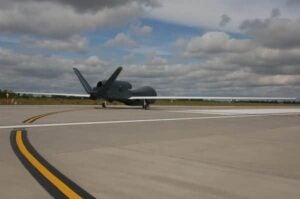 “Although Global Hawks have been supporting our warfighters in Afghanistan and elsewhere for more than a decade, this is the first time this specific model has been deployed into war,” said Col. Lawrence Spinetta, commander of the 69th Reconnaissance Group, the unit in charge of conducting Global Hawk missions.

The RQ-4 Global Hawk is a high-altitude, long-endurance unmanned aircraft system with an integrated sensor suite that provides intelligence, surveillance and reconnaissance, or ISR, capability worldwide.

“This historic flight is a testament to the hardworking maintenance personnel, supportive leadership, countless pilots, sensor-operators, and contractors who have put hundreds of hours testing, evaluating, and preparing for its launch into war,” said Spinetta. “They have built the necessary momentum to succeed and accelerate in the dynamic environment the aircraft will face in a combat arena.”

This recent flight into war isn’t the only Global Hawk milestone the Airmen at the 69th RG have been a part of this year.

On Sept. 5, the RQ-4 achieved 100,000 flight hours, a significant achievement for the combat-proven intelligence, surveillance and reconnaissance system.

“You can’t help but feel a great sense of pride to be part of important moments such as these,” Spinetta said. “The Block 40’s GMTI provides a much-needed capability for our troops overseas, allowing them to track vehicular movement of enemy forces in near-real time over large areas, regardless of weather.”