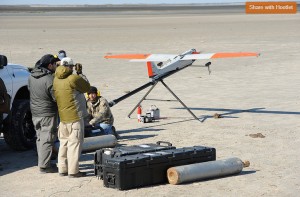 The Texas Municipal League (TML) has adopted a resolution supporting the Texas A&M University-Corpus Christi application to the Federal Aviation Administration (FAA) to be named one of six federal unmanned aerial vehicle (UAV) test sites. The vote was made Friday, Oct. 11, at the groups 2013 Annual Conference in Austin.

“With the backing of Governor Rick Perry, we are the only site in Texas being considered,” said Dr. Luis Cifuentes, Vice President of Research, Commercialization and Outreach. “The resolution from the TML demonstrates the financial impact the FAA designation will have on every community in the state.”

“The strong show of support from Texas cities should be a tremendous boost to the State’s application,” Mayor Martinez said. “Texas has unmatched airspace, a strong business climate, cutting-edge research partnerships, and broad public support from state and local governments, higher education institutions, and the private sector.”

The University’s Lone Star Unmanned Aircraft Systems Initiative, and its 6,000 square miles of available airspace, is in competition with 24 other locations around the country for the federal designation. The Association of Unmanned Vehicles International published an economic impact study in March projecting, once airspace is opened to UAV’s, the economic impact on the state of Texas alone would be around $6.5 billion over the next 10 years.

“With the center of that economic being the Coastal Bend area, the economic impact here would be absolutely significant,” said Joe Henry, Unmanned Aircraft Systems Account Manager for Camber Corporation.

The Camber Corporation is collaborating with the University and several other entities to secure the FAA test site. Camber is a leader in UAV technology and was approached by several states to help in developing test sites, but chose Texas because of what the University has to offer.

“The intellectual energy and intellectual capital this university brought to the table, along with the leadership and the vision of both University President Dr. Flavius Killebrew and Dr. Luis Cifuentes, makes us very excited about our partnership with Texas A&M-Corpus Christi,” said Henry. “We have no doubt that this site will be chosen.”

The University opened its UAV command and control center on Oct. 1 in preparation for the designation, which is expected to be announced in December. After the FAA announces its decision, the six test sites will have six months to become fully functional. Cifuentes says this command center will be necessary even if Texas A&M University-Corpus Christi isn’t chosen as one of the sites.

“We still have airspace that everyone else is going to want, and we will partner with anybody who wants to use it,” said Cifuentes. “I see this type of innovative research as the ‘new age’ for Texas A&M University-Corpus Christi.”