The Navy continues to demonstrate multiple technologies that promise to significantly increase the endurance and range of carrier-based unmanned aircraft.

As part of the Unmanned Combat Air System Demonstration (UCAS-D) program, the Navy and industry partner Northrop Grumman completed another phase of its Autonomous Aerial Refueling (AAR) test, Sept. 6, in Niagara Falls, N.Y. to demonstrate the capability to refuel unmanned aircraft in flight.

“The AAR segment of the UCAS-D program is intended to demonstrate technologies, representative systems, and procedures that will enable unmanned systems to safely approach and maneuver around tanker aircraft. We are demonstrating both Navy and Air Force style refueling techniques,” said Capt. Jaime Engdahl, Navy Unmanned Combat Air System program manager. The Navy, Air Force, and the Defense Advanced Research Projects Agency have been working closely since 2001 to develop technologies and mature operating concepts for AAR, according to Engdahl. 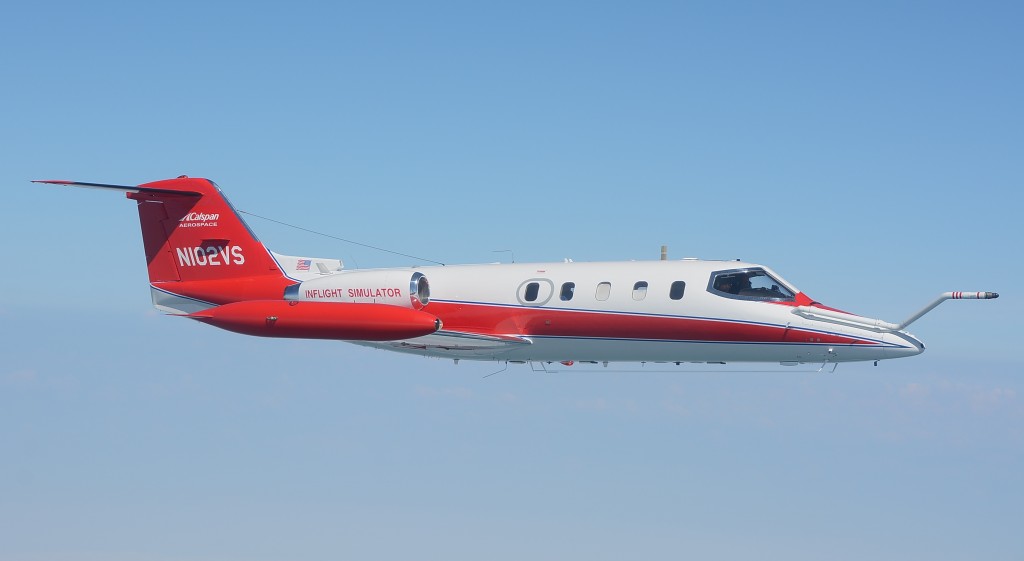 This Calspan Learjet, shown with inert probe in aerial refueling observation position, flies as a surrogate autonomous aircraft and is outfitted with the X-47B‘s navigation, command and control, and vision processor hardware and software to assess autonomous aerial refueling functionality and performance for both Navy and Air Force style refueling techniques. (Photo courtesy of CTSi)

In preparation for this phase of the AAR testing, Calspan Aerospace developed, built, and tested an inert refueling probe that they installed on the nose of a surrogate unmanned aircraft, a Learjet inflight simulator. In August, the AAR UCAS-D team arrived at the Calspan facility and while a team from Northrop Grumman installed the X-47B’s navigation, command and control, and vision processor hardware and software on a Calspan Learjet aircraft, the government team installed the government developed Refueling Interface System and Tanker Operator Station on an Omega 707 tanker aircraft. The team then conducted initial ground and taxi tests, which culminated in the first AAR test flight Aug. 28. The team then conducted a series of flights using the surrogate aircraft equipped to fly autonomously behind an Omega K-707 Tanker.

The AAR test was designed to assess the functionality of final X-47B AAR systems and navigation performance, as well as to test the government tanker refueling interface systems. The AAR program is using similar digital messaging, and navigation processes that have been demonstrated by the UCAS-D team aboard the aircraft carrier.

“Demonstrating AAR technologies and standard refueling procedures is the next logical step for our demonstration program. The team has shown that we can use the same systems architecture, Rockwell Collins TTNT datalink, and Precision Relative GPS (PGPS) algorithms to extend the concept of distributed control of autonomous systems from the aircraft carrier to the airborne refueling environment,” said Engdahl. “The initial tests showed excellent system integration as well as good navigation and vision system performance.”

The next phase of AAR testing will continue later this fall, exercising end-to-end AAR concept of operations with a complete autonomous rendezvous, approach, plug, and safe separation utilizing X-47B software and hardware installed in the Lear surrogate aircraft. Data from the demonstration will be used to assess system performance for multiple AAR refueling technologies, validate the AAR procedures and concepts, and support further development of future unmanned systems.

“By demonstrating that we can add an automated aerial refueling capability to unmanned or optionally manned aircraft, we can significantly increase their range, persistence and flexibility,” said Engdahl, who is very impressed with the system’s performance thus far. “This is a game-changer for unmanned carrier aviation.”