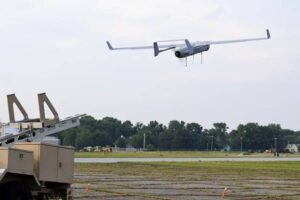 The RQ-21A Small Tactical Unmanned Aircraft System (STUAS) completed its first East Coast flight from Webster Field Annex on June 12, marking the start of the next phase of test for the program.

A team from the Navy and Marine Corps STUAS program office (PMA-263) here and industry partner Insitu, Inc., are conducting flight operations at Webster, NAS Pax River’s outlying field, this June in preparation for Integrated Operational Test and Evaluation (IOT&E) in the fall.

During the June 12 flight, Insitu operators launched the unmanned aircraft using a pneumatic launcher, eliminating the need for a runway. The RQ-21A was recovered after a 1.8 hour flight, using a company-built system known as the STUAS Recovery System (SRS). The system enables a safe recovery and expeditionary capability for tactical UAS on land or at sea.

“This test period brings us closer to providing our warfighter with a unique capability — an indigenous UAS capable of operations from both land and sea,” said U.S. Marine Corps Col. Jim Rector, PMA-263 program manager. “The expeditionary nature of the RQ-21A makes it possible to deploy a multi-intelligence capable UAS with minimal footprint.”

The current phase of testing is intended to validate updates that have been made to the system in the past several months, which include software, fuselage and camera enhancements. The conditions at Webster Field also allow the team to test aircraft performance points at lower density altitudes, said Greg Oliver, the program’s lead test engineer.

In 2012, the small unmanned aircraft completed land-based testing in China Lake, Calif., and began ship-based developmental tests aboard USS Mesa Verde (LPD 19) in February. After this test phase is complete, the team will transport the system, which includes a ground control station and three air vehicles, back to Norfolk, Va., to embark LPD 19 for shipboard flight testing in July.

The RQ-21A platform is designed to fill a need for the Marine Expeditionary Forces, Navy L-Class ships, and Naval Special Warfare (NSW) Units. When deployed, it will provide a 24/7 maritime and land-based tactical reconnaissance, surveillance, and target acquisition data collection and dissemination capabilities to the warfighter.